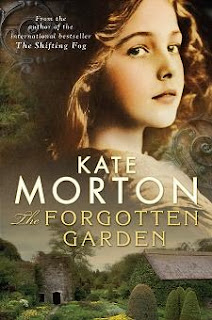 The Forgotten Garden was the selection for my Book Club last month and I have to say that when I first heard it was the book we would be reading I wasn't all that excited. I had already read this book when it first came out after reading, and loving, the author's first book - The Shifting Fog (or The House at Riverton as it is named in the UK) and I was disappointed that I was going to be "forced" to read a book that I hadn't enjoyed all that much the first time all over again! I had initially felt let down by Morton's second novel - on my first reading I hadn't felt that The Forgotten Garden was as powerful or as original as The Shifting Fog - but my second reading has definitely redeemed the book in my eyes.
The Forgotten Garden (as does Morton's first book) moves between locations, time periods and characters. As the book starts we are introduced to Nell O'Connor who is living in the Australian city of Brisbane in 1930, about to turn 21 and marry her young sweetheart. On the night of her Birthday party her father tells her a secret that he has been keeping from her since she was a young girl - a secret that will eventually send Nell to the English countryside to discover the truth about her history.
Linked in with Nell's story is the story of her granddaughter, Cassandra who learns some of Nell's story after her death and then travels to England herself to track down more of the story and the story of a two young women who despite growing up in very different circumstances in the early 1900's England are intricately linked with each other and with Nell and Cassandra's story.
Ahh the links! They are really the crux of the success (or failure) of this story and for some reason I felt they worked better on the second reading for me - even though I knew how everything turned out in the end! The stories are woven together with themes of art, fairy tales, the essence of truth and connection and loss. It might have been a case of the right book at the right time for me on this occasion but I felt the themes and links worked well to produce a great story and an enjoyable read.
Posted by Karen at 1:29 AM

It's good that you enjoyed it the second time round, this is my favourite book of hers, I was totally absorbed in the story.

I agree with Dot- glad you enjoyed this, I found it even more interwoven than The Shifting Fog. I think it's a book best read in big chunks in the depgth of a rainy winter. I'm interested to see what her next book is like.

I quite liked the book, even though I have to say that the different stories and eras were so interwoven that I had to reread certain passages to be able to keep track. Nevertheless, a really good book.

I don't often reread, so I found it interested that this book worked so much better for you the second time around.

I am looking forward to the next Kate Morton book!

I got this book for Christmas the year before last and I enjoyed it. It was a good story. I actually thought that the end was a bit predictable and saw it coming a mile off, but I still enjoyed reading it. It was a real page turner, if not very challening. The Shifting Fog is good too in the same way. Not difficult, but 'absorbing', just like Dot said.

I haven't read Kate Morton yet and this one has been on my list for awhile. It sounds awesome.

Hi Dot - I have heard a lot of people say that they prefer this book to her first one.

Hi sam - I think you might have hit the nail on the head in terms of why I liked this one better the second time around - this time I did read it basically in one chunk over one weekend!

Hi the bookaffair - I agree, I think that's why it helped reading practically all in one go this time - it was easier to keep a track of.

Hi Marg - I definitely don't re-read books that I wasn't that impressed with the first time around - but book club made me this time! I'm really looking forward to her new book too.

Hi Holly - I hope you get around to it soon!

Having read this I thought it was rather enlightening. I appreciate you finding the
time and effort to put this content together. I once again find myself spending a
significant amount of time both reading and leaving comments.

But so what, it was still worth it!

Amazing! This blog looks exactly like my old one!

It's on a entirely different topic but it has pretty much the same page layout and design. Superb choice of colors!

I visited multiple web pages but the audio quality for audio songs current at this site is genuinely wonderful.

Hello my friend! I wish to say that this article is awesome, nice written
and come with almost all important infos. I'd like to look extra posts like this .

This is very interesting, You are a very skilled blogger.
I've joined your rss feed and look forward to seeking more of your excellent post. Also, I've shared your site in my social
networks!

Look into my weblog ... vestal watches for men

Thanks for your marvelous posting! I genuinely enjoyed reading it, you could be a great author.
I will be sure to bookmark your blog and will
come back in the foreseeable future. I want to encourage you to definitely continue your great
writing, have a nice morning!

Here is my weblog: Kolleg-st-thomas.de

Hey I know this is off topic but I was wondering if you knew
of any widgets I could add to my blog that automatically tweet my newest twitter updates.
I've been looking for a plug-in like this for quite some time and was hoping maybe you would have some experience with something like this. Please let me know if you run into anything. I truly enjoy reading your blog and I look forward to your new updates.