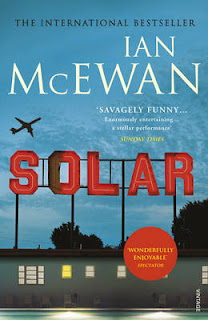 I would rate Ian McEwan as one of my favourite authors - but like many others Solar would not be one of my favourite of his books. That's not to say I didn't enjoy the read - it is classic McEwan in so many ways - great characterisation and gloriously detailed and descriptive writing are two of the traits that I love so much in his writing. But overall it just wasn't a story that grabbed me.

Solar is the story of British physicist Michael Beard - truly one of the most unlikeable and disgusting characters I have ever read! When the story opens Michael is in turmoil as his beloved fifth wife is having an affair - and as it is Michael that usually engages in affairs in his marriages the whole situation has thrown him out a bit. Michael is also having some trouble at his workplace - a newly developed research centre exploring different energy sources for human consumption. Michael's personal and professional lives come together in a totally unexpected way and the event sets Michael on a new career path (not entirely of his making) to look at the utilisation of solar energy.
As is the norm in McEwan's books he goes into extreme detail about the science involved in his story line - this would normally bore me completely if any other author tried it but McEwan always makes this work for me. Even though I was not a fan of Michael Beard as a person I did enjoy reading about his as a character - I think part of me was just reading to see if he got what was coming to him at the end!
Posted by Karen at 5:31 PM

I have come to the conclusion that Ian McEwan just is not an author for me. I liked Atonement well enough, but a few years ago I read Amsterdam and HATED it so very very much. I respect that many people like McEwan but it causes me great pain to read him, so I figure I'm better off spending my time on other authors!

I liked this book a lot at the time of publiciation and when I first read it. Then I had time away from it and have been wondering ever since if I loved this book merely because it was the latest McEwan at the time? Not his best.

Hi Steph - If you didn't enjoy Atonement then you should definitely stay away from McEwan I think!

Hi Simon - I agree, definitely not his best - but then McEwan's worst is probably a lot better than some peoples worst!

Nice review - this book seems unusual in that there's quite a consensus around it. Even McEwan fans seem united in saying it's not his best work. I like the idea of combining environmental science with fiction, but I think I'll wait for someone to do it better. Atonement is my favourite McEwan by far. I'm interested to hear what you make of the Goon Squad book - it's one I've heard great things about and am thinking of buying.

My relatives all the time say that I am wasting my time here at web, however I
know I am getting experience every day by reading thes good
content.
Feel free to visit my weblog :: horse betting

To make things easier and help you make savings,
various newspaper services have invented the scheme of Newspaper subscription deals.
It familiarizes us with the world and people who are making history.
They also tend to endear themselves to populations in
times of severe duress and hardship by well funded relief efforts and other charitable initiatives,
which make them look incredibly social compared to corrupted governments.

Thus, by putting the price, you get targeted customers who are
very interested in what you are offering; in other words, you get hot leads.
Once the symphony begins, Paul loses himself in the sound as he had in the stuff
exhibited in the picture gallery.