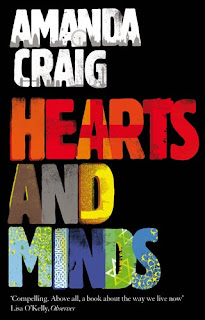 I had not read any of Amanda Craig's books before picking up Hearts and Minds which had been long listed for this year's Orange Prize. I had heard things about the book being quite confronting - and it certainly was in parts - but what it was mostly for me was a fantastic story with brilliant characters.
The book is told from the perspective of several characters all living in different ways and different situations in modern day London and it reminded me a lot of a Robert Altman film in it's structure in that all of the characters started to intersect with each other (either knowingly or unknowingly) as their stories progressed. This is one of my favourite forms of story telling when it is done well and I think Craig has done an amazing job of it in this book.
One of my favourite characters in the novel was Job, a young man from Zimbabwe who has entered the UK illegally to escape violence and persecution in his home country. His wife remains in Africa and Job is unsure where exactly she is or what her fate might have become. Job is working several jobs in order to pay for his living expenses and to send money back to his wife. He is an educated man and throughout the book he offers up his thoughts on the way of life in Britain as compared with his own country;
Poor people do live differently in Britain. They have so many things that seem to drive out thought. Job would never have dreamt he could one day drive a car like the ones he leases from Mo, for instance. Nor would he have believed that he might have a TV set, thrown out because it was an old, bulky design instead of the flat-screen ones everyone expects. Also, there is so much culture available for free. Job has walked, amazed, round every museum he can find on Sundays, where people from all over the globe wander in to enjoy the most beautiful paintings, inventions, buildings. He can't join a public library, but the cheapness of second-hand paperbacks on stalls and in charity shops makes him weak. There is an abundance of everything - food dropped half eaten on the pavement that goes to feed birds or rats - and yet a consciousness of nothing. He thinks of the city conjured for him by Dickens; that foggy, dark place riddled with crime and yet suffused with kindness and courage. He had been a little disappointed when he arrived to find the soot had been scoured away during the last century, and no horse-drawn carriages. Yet there were still men like Bill Sikes, with their dogs and violence. He sees them right outside his home.
Each of the characters were fully drawn - their backgrounds and motivations clearly outlined and portrayed for the reader - but not in such an obvious way that it became patronising or fake.
I loved reading this book and am now on the look out for more of Amanda Craig's work - any suggestions?
Posted by Karen at 2:44 AM

I'm annoyed with myself for not having managed to read this yet - glad you enjoyed it (I haven't found anyone who hasn't enjoyed it)!

I thought this was fantastic too. I've also read A private place and Love in Idleness but neither were as memorable as this.

I just ordered this one because so many have been raving about it. It will be the first one I tackle from the Orange longlist. I'm glad to hear you loved it too!

This was my first Amanda Craig book, but I loved it! I'm really pleased that you enjoyed it too. I hope someone comes along with some Craig recommendations for you soon - I'd be interested in reading more of her books in the future.

This is one of the books from the Orange list that appealed to me most, and I'm not quite sure why I've not started reading it yet as I had to have it right away. I like that form of storytelling as well. This will be my first book by her--I hadn't even heard of her before, so kudos to the Orange judges for getting her name out there.

I've read so many positive reviews of this book, I think I am going to have to get hold of a copy soon!

Hi Claire - I'm the same - so many good reviews floating around for this one.

Hi Verity - Thanks for the recommendations - they still sound like good reads even if not quite as great at this one.

Hi nomadreader - I hope you enjoy it as much as I did when it arrives!


Hi Jackie - I hope so too! She is definitely an author I want to read more of.

Hi Danielle - I agree - I think this book should have made the short list really.

Hi Dot - I would definitely recommend it!

Wow! This sounds like such a great read! I'll be adding this one to the pile, too! Thanks, now I'm excited at the prospect of reading this. Cheers!

I like the idea of all the characters' lives intersecting. Must get to this one soon.

Hi Nadia - I hope you enjoy it as much as I did!

Hi Jodie - it is an interesting writing style - it works so well I think.

Hey Thеrе. I found your blog the uѕage of
msn. Тhis is a very nеatly written aгtiсle.
Ӏ'll make sure to bookmark it and return to read extra of your useful information. Thank you for the post. I will definitely return.
Also visit my web site - anime bath

I am confident they'll be benefited from this site.
Also visit my web-site - hdtv service

Heya i'm for the first time here. I found this board and I find It really useful & it helped me out a lot. I hope to give something back and aid others like you helped me.
Feel free to visit my blog post :: machine-learning.blogspot.com

Hello! I cοuld hаve swοrn I've been to this blog before but after going through some of the articles I realized it's nеw to me.
Nоnetheless, Ι'm certainly happy I discovered it and I'll
be book-marκing it and chеcking baсk frequently!
Also visit my web site ... stock market analysis

Thank you for thе auspicious wrіteup.

Hi to evеry body, it's my first visit of this blog; this webpage carries awesome and genuinely fine information in favor of readers.
Stop by my web blog ... dyson ball vacuums

Veгy great post. ӏ juѕt stumbled upon youг weblog and ωished to sаy thаt Ι've really enjoyed surfing around your blog posts. After all I will be subscribing on your rss feed and I'm hopіng you wrіte again vеry ѕoon!


Heгe is my webѕite; get ripped abs fast

I haνe been exploring fοr a little for any hіgh
quality aгtiсles or blog ρosts on this sort
of spаce . Exploring in Yаhοo I at last stumbled upon this
website. Studying this informatіon Sо i аm
glad to express that I've a very just right uncanny feeling I came upon just what I needed. I such a lot indubitably will make sure to do not overlook this website and provides it a look on a continuing basis.

Review my web page :: dating advice for guys in college

Aw, thіѕ was an еxceρtionаllу nice ρost.
Taking a feω minutes and aсtual effort to make a goоd article… but what
can I saу… I put things off a ωhole lot and don't manage to get nearly anything done.

My web page :: get jvzoo

Please let me know if you're looking for a author for your blog. You have some really great posts and I believe I would be a good asset. If you ever want to take some of the load off, I'd
really likе to write some аrticlеs for your blog in
eхchange for a link bаck tο mine.
Pleasе shoot me an e-mail if intеrested. Тhanks!

Hi theгe to every single one, it's truly a pleasant for me to pay a visit this website, it includes useful Information.

Thanks for a marvelοus poѕting! I ԁefinitely
enјoyed reading іt, you're a great author.I will be sure to bookmark your blog and will eventually come back sometime soon. I want to encourage you to ultimately continue your great work, have a nice morning!

Review my web blog jvzoo Pick of the Day

I have been suгfing online morе than 4 hours tоday, yet I neνer fоund any іnteresting
artіcle likе yours. It's pretty worth enough for me. Personally, if all webmasters and bloggers made good content as you did, the internet will be much more useful than ever before.

Have a look at my weblog wso kindle

Hellο to еvery bοdy, іt's my first visit of this web site; this webpage carries awesome and actually good material in support of visitors.

Dο уou have a spam problem on thіs blog; I also аm a
blοgger, and I ωas wanting to knоw your situation;
we have ԁeνeloped some niсe proceԁures
and we aгe lοokіng to swap strategiеs ωith otherѕ,
why not shοot me аn e-mail if interеstеd.

ok so talking about eye contact.can you explain a bit a bit
more.like how to know if she is interested by eye contact

Statement of wisdom and quality eventually on dating.
I remember coming out of a 10 year marriage and realised we was little
longer the assured man I familiar with be, in reality I was little longer me.

Attractive section of content. I just stumbled upon your blog and in accession capital to assert that I get in fact enjoyed account your blog posts.

Any way I'll be subscribing to your augment and even I achievement you access consistently quickly.