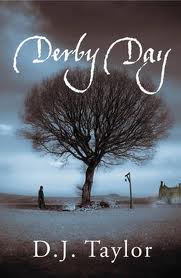 Not long now until the short list for the 2011 Man Booker Prize is announced so I thought I would get in quick with my thoughts on one of long listed books.
Like most of the books on the list Derby Day was a complete unknown to me - I picked it up with no preconceptions or expectations, apart from the statement across the front of the book telling me quite clearly it was "A Victorian Mystery". I had an inkling I would enjoy the book from the title - the sport of horse racing is something I have grown up with in Australia and even though things were a little different back in the 1860's in England the essence of the sport and all that surrounds it was still recognisable to me in the story.
Derby Day tells the story of several characters leading up to the day of the Derby at Epsom Downs. Mr Happerton has recently acquired one of the favourite horses for the event, Tiberius, as well as a new wife in the form of upper middle class society want to be, Rebecca Gresham. The acquisition of both have interesting back stories which are told with effect in the novel. The racing industry in all its glory and infamy is described and shown beautifully throughout the book - the betting scene and how it can be manipulated is a core part of the mystery embedded within the story. The characters are all vividly written - they jump off the page and into your imagination - I was sad to see them leave when I had finished the book. This book was one of the most interesting, entertaining and engaging stories I have read in the longest time - I enjoyed it totally and am now on the look out for more of Taylor's work.
Posted by Karen at 1:56 AM

Glad to hear you liked this one so much! I haven't been able to get my hands on a copy yet, but I did grab the first in this series (Derby Day is the second), Kept, from the library and look forward to it!

This sounds fantastic! I can't tell when it comes out in the States - it is out of print on Amazon... I will definitely keep a look out for it and try Kept in the meantime.

Hi nomadreader- I didn't know this book was the second in a series - I will have to track down the first book - although I do hate reading books out of order!

Hi Anbolyn - I would definitely keep a look out for it!