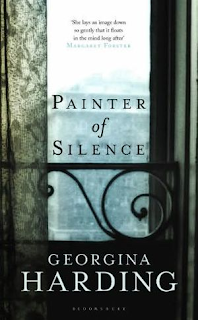 Painter of Silence is one of the books that has made it to the Short List of the 2012 Orange Prize but it was on my reading radar despite this accolade.
The Painter of Silence is a story set in Romania in the early 1950's but it sways back and forth between then and the earlier period of World War 2 and the establishment of Communism. The two main characters, Augustin and Safta have known each other since child hood when Augustin's mother was the cook for Safta's wealthy, land owning family. Augustin was born deaf and mute but he found a way of communicating through his talent for drawing. Now, after a traumatic and violent past he has found Safta working as a nurse in a hospital in the town of Iasi - he has come specifically looking for her as he has as story he needs to pass on to her in time, through his drawings.
This is an extremely visual, evocative book full of rich imagery that sometimes felt as though a painting was being drawn for the reader by the author. The inability of Augustin to speak out loud means that the reader is brought into his inner thoughts as a way of understanding him - this is a technique used for most of the characters even though they have the ability of speech and I really liked the feel this gave the book - of almost a dreamlike type quality. I know this is sounding all a little wishy washy - but the story, plot and characterisation all remain strong despite this ethereal quality to the writing - it was the best of both worlds for me!
Posted by Karen at 9:54 PM 38 comments: