The Girl Who Played With Fire - Stieg Larsson 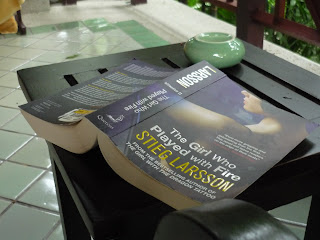 I had read The Girl With The Dragon Tattoo last year and had mixed reactions as you can see here. However, I was still keen to read the rest of the series - I just needed a little break from the violence for a while! I ended up taking the second book in the series, The Girl Who Played With Fire with me on our recent holiday to Thailand - what better place than a tropical island paradise to read about death, murder and violence in Sweden??!!!
I was gobsmacked by how many people at our resort were reading the books from this series - I swear nearly every second person had one in their hands - in every language - it even inspired people to come up to me when I was reading by the pool to share their thoughts and to see how I was liking it. Whatever you think of the books themselves I think you have to stand in awe of the reaction they have elicited from readers (and probably a lot of non-readers) from around the world.
It took me a while to get into The Girl Who Played With Fire - I read past my normal test of 100 pages in the hope that I would get inspired - I eventually did but it took a rather brutal murder to get me interested which is a bit of a worry! I found that the first section of the book took a lot of time (way too much in my opinion) to set the scene and go over information again, and again and again - I was getting bored. Once the action took place though the pace picked up and I was hooked until the end - even chasing down a copy of the third book in a rare English language book shop in Koh Samui so I could read the conclusion to the series.
What did I think of the third and final book? Stay tuned... 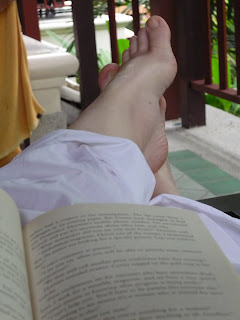 I really, really liked The Girl with the Dragon Tattoo, albeit very graphic, etc., there was something very different about it that made me page through it while on a business trip (which consequently made me a bit more paranoid during my trip!) I blogged about it as well because I was so surprised by it. The other 2 were good, but for me, didn't have the same as the first one. Of course, I'm fascinated by Stieg Laarsen as well and his life, and the conspiracy theories behind his death, so that made me continue to read. I'm excited to hear your thoughts on the 3rd book as well!

The first one was alright, but the sequel to it was so very good.

I really loved this book (I just reviewed it, sort of, at my blog), but like you, it took me a while to get into it. I'm so glad I gave it a chance, though. Like Coffee and Book Chick, above, I liked the latter books less than the first, but all together, I found them great summer reads.

Thailand! I am so, so jealous!!

I have mixed feelings about the series too. Once they have got your attention, they really suck you in, but you do have to read a whole lot of useless information to get to the good stuff!! I recently finished off the final in series which was the worst of the lot, but I am still sad to be finished

Hi Coffee - The whole story around the books is very interesting isn't it?? I wonder what would have happened had the author still been alive when they were released??

Hi Jillian - I'm definitely liking the first one the most.

Hi Connie - I understand, I'm not sure I would have read them like I did if I had been at home and not on holidays.

I loved this series- I hope you enjoy the third book just as much as I did. I thought the third was less violent; it's more thought and less guns.
Happy reading!

I have yet to start the series but they are sitting on my nightstand at the moment - so I wil be diving in soon enough. I've heard they are rather graphic and violent, so I'm expecting that, but not sure what else to expect. Should be an interesting read. Well, I think its cool when people are reading the same book or series and come up and have a quick chat about it - you get new and different perspectives. I remember when HP came out in England, everywhere I went people had a copy in their hands - I'm thinking the same thing can be said for these Larsson books. Cheers!

Hi Sam - I actually liked the third book the least! I totally agree with you about it being less violence (and that was nice!) but I just thought it had nothing new to add to the story which I found disappointing.

Hi Nadia - so true! I really hope you enjoy them when you dive in!

This is my favourite of the trilogy. I raced through it, and didn't end up sleeping that night, just to finish it. Needless to say, I was extremely sleepy at work the following day!

Wow, isn't that a wonderful commentary on the power of reading! its so great to see books capture a number of readers' attentions, especially in a variety of languages.

It is amazing isn't it how a book, or in this case a series, can capture the imagination of so many people.... I read the first two in quick succession but was exhausted and didn't read the third until just recently. I'll be interested to see what you think.... I dont think it stands alone, but it DID get me in straight away.