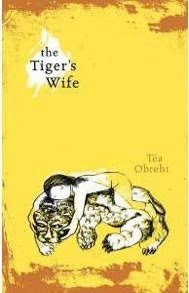 I am continuing my way through the list for the Orange Prize 2011 with my most recent read being the shortlisted The Tiger's Wife by debut novelist Tea Obreht.

I must admit I had my doubts about this book - not necessarily about the greatness of the writing - more about it not really being "my type" of book. But, this book was for me a perfect example of why I should constantly try and stretch my reading - because the reward is finding absolute gems like The Tiger's Wife.
The Tiger's Wife is the first novel by Yugoslavian/American writer Tea Obreht who is making a lot of news in the publishing world and is already receiving huge accolades for her work. I am greatly looking forward to hearing her speak at the upcoming Sydney Writers' Festival.
The book is written through a series of stories, almost myths, that have been told to the main character, Natalia by her grandfather as she was growing up. The stories come from her grandfather's childhood and beyond and the stories form a bond between the two that carries on into Natalia's adulthood. As an adult Natalia has become a doctor (just like her grandfather) in an unnamed Balkan country and it is on a trip into a small village to provide immunisations to orphan children that Natalia learns of the death of her grandfather in a neighbouring village. It is the news of his death that prompts Natalia into remembering the stories he has passed down to her and connecting her to his death and the journey she must now take to retrieve his belongings.
For me this book was like reading one huge fairytale/children's story/mythical tale - but in a very adult and sophisticated way. I was initially turned off reading this book by mention of the term "magical realism" but I felt as though The Tiger's Wife was very much grounded in reality - even though some parts of the story do seem to come from a mythical and magical place. I believed very much in the characters and the events taking place and this is what made the book work for me.
The writing was brilliant - this woman knows how to engage an audience and tell a story.
My heart was wanting Great House to win The Orange Prize but now I am not so sure...
Posted by Karen at 11:10 PM

I've heard NOTHING but raves about this from a bunch of different sources (blogs, twitter, the NY Times and Entertainment Weekly, for starters, hehe) but didn't really have much of an idea what it was about. Now that I do, I can totally see why it's gotten the praises it has - what a great review!

This is a book I've heard mixed things about; critically, it was adored, but then I started reading blogger reviews that were less than glowing. It made me wonder if it really was a must-read book... After reading about your experience, I am going to give it a go!

I've heard so many great things about this book and read only one bad review, so I'm thinking that this one is a must read! Loved your post, because now I am positive that I will be buying this one ASAP. Thanks!!

I am going to see her speak at the Sydney Writers Festival too and so I wanted to try and read this before I go - unfortunately everyone else seems to have has to the same idea and so I am now on a massive waitlist at the library to read it. Fingers crossed I get a chance before the fesitval.

Great review - and I am still looking forward to reading it.

PS. Im goig to see her at the Big Reading. What about you?

Vaguely I have this plan to read this year's Orange shortlist but haven't yet -- but you've got me greatly excited for this one! I hadn't realized it had a magical element, which I rather love in my fiction.

If you like Slavic-y fairy tale-ish-ness, you might like There Once Lived a Woman Who Tried to Kill Her Neighbor's Baby: Scary Fairy Tales by Ludmilla Petrushevskaya -- it's a collection of short stories that have a twisted fairy tale element to them -- v good!

Now, I think I'm interested.... I saw this recently at McLeans Bookstore and was so tempted, but then again I didn't get it. But this post indicates I should've. Thanks for the review - might pick this up on my next work trip. PS - I love the authors name...

Hi wereadtoknow - It really is one of those books that is hard to describe in many ways - I can see every reader would get something completely different from it.

Hi Steph - I think you should give it a go - I think it will be one of those books that will divide people - you will either love it or hate it I think!

Hi Nadia - I really hope you enjoy this one. I think it is such a unique story - lovely!

Hi Becky - I would be more than happy to send you my copy to read before the festival if you would like?? Just email me if you would like me to send it your way. Yes - I am going to the big reading too!! Would you like to catch up??

Hi Audra - thank you so much for these suggestions - I will have to check them out!

Hi T - I think you would really like this one. I have just offered to send my copy to Becky but if she doesn't take me up on the offer I will send it your way.

Thanks for the review. Was given this book on my birthday, and then read a few negative reviews about the book, which disappointed me. Now, I'm happy again! :)

It wasn't what I expected - and several people I know said that too - but I really enjoyed it. I thought it would be a grim story of the Balkan War rather than the wonderful, meandering Eastern European fairy tale that it is.

Great book - not perfect but she is a terrific writer for one so young and I look forward ot her next.

I was captivated with the story and characters from cover to cover. I loved the use of folklore in the story and I love how this book has a distinct sense of place. As an avid, but often broke traveler, I love books that expose me to different places in the world. I knew very little of the history and culture of the Balkans, after starting this book I have been compelled to do a little research to learn about this region.

I was captivated with the story and characters from cover to cover. I loved the use of folklore in the story and I love how this book has a distinct sense of place. As an avid, but often broke traveler, I love books that expose me to different places in the world. I knew very little of the history and culture of the Balkans, after starting this book I have been compelled to do a little research to learn about this region.