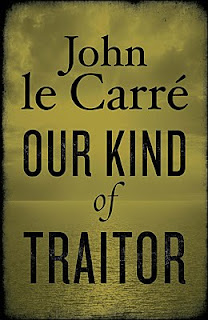 I have vague memories of reading, and enjoying, le Carré's classic novel The Spy Who Came In From The Cold way back in my high school days but I have never really ventured into the whole spy/espionage genre of fiction apart from that. No reason in particular for my avoidance - I just haven't gone there.
The description of Our Kind Of Traitor spoke to me though when I was looking for a book to keep my attention in the past few weeks when reading time and energy has been in short supply. The book follows the adventures of English academic, Perry Makepiece (I love this name!) and his lawyer girlfriend Gail after they bump into a Russian criminal and millionaire, Dima, while enjoying a tennis holiday in Antigua. Perry and Gail become enmeshed in Dima's world and end up acting a go between for him with the British Intelligence Service as he tries to rustle up a deal that will put him and and his family safely in London away from his criminal cohorts. The book travels from the island of Antigua to London to Paris and to Switzerland - it is fast paced but at the same time it doesn't get lost in the movement - each character is developed and explored without rushing.
I have absolutely no idea if the events in le Carré's book could or would ever plausibly happen - and I don't care! This book had me riveted from start to finish and I am now on the lookout for more of le Carré's books - any suggestions gratefully received!
Posted by Karen at 1:00 AM

I loved Our Kind of Traitor! I was surprised by that too, since I tried reading The Constant Gardener and could not get into it. I've been wanting to give some of his other books a try and I might pick up the one you mentioned reading in high school.

Did you have any favorite characters in Our Kind of Traitor? I thought he did a superb job of giving them all unique personalities. Perry was hilarious at times :)

When you answer Kelly's question about character, perhaps you could also provide some details about what links the story to Paris? I liked the Constant Gardener and I dont mind a spy story. This one might be a good holiday read. Thanks for the review

Hi Kelly - I have heard that The Constant Gardener is a bit tough - and I have already seen the movie so I don't think I will attempt that one. I did love Perry but I thought Gail was brilliantly written. Although I wouldn't necessarily say that I liked her I thought the way le Carre wrote her character was very perceptive.

Hi T - The main reason the characters head to Paris is to attend the French Open tennis final - so there isn't a real lot of Paris travel highlights apart from that! I think this book would make a great holiday read - I will hold onto it for you.