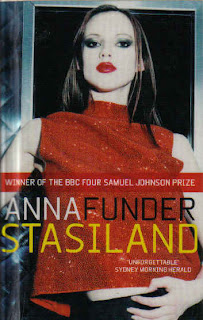 I am definitely going through a German reading phase at the moment so if any one has any suggestions for great books set in this country could you please send them my way.
Stasiland is a book I have had on my shelf for quite a while - since it was first published actually. I had caught the author doing a radio interview as part of her tour for the books release and I was fascinated by the subject area but also the way Funder spoke about her research for and her process of writing the book. I eagerly rushed out to buy a copy but then like so many other books, it was pushed aside for other reading choices - a victim of the "so many books, not enough time" dilemma we face on a daily basis.
Luckily for me Stasiland was one of the required reads for a course I was doing this semester on creative non-fiction as part of my masters so it has finally made it to the read pile of my bookshelves.
Stasiland tells several personal stories of the devasting impact of the Stasi (the East German secret service) in the life of the German Democratic Republic. Funder has interviewed people from all sides of the story, GDR citizens who were affected by the regime and  Stasi informants and members who carried out the work.
In the 1990's Funder was working for a television station in Germany when she became interested in the stories of the people who had been ruled by the Stasi:


Later, Frau Hollitzer told me about Miriam,  a young woman whose husband has died in a Stasi remand cell nearby. It was rumoured the Stasi orchestrated the funeral, to the point of substituting an empty coffin for a full one, and cremating the body to destroy any evidence of the cause of death. I imagined paid-off pallbearers pretending to struggle under the weight of an empty coffin, or perhaps genuinely struggling beneath a coffin filled with eighty kilos of old newspapers and stones. I imagined not knowing whether your husband hanged himself, or whether someone you now pass in the street killed him. I thought I would like to speak with Miriam, before my imaginings set like false memories.
﻿
The transparency of Funder's research and interviews are shown through out the book - Funder herself is very much present as a character in the book and her emotions of shock, anger, frustration and sadness echo those that we are feeling as a reader as we hear about the atrocious acts committed against the East German people under the Stasi.﻿ There is also a strong tone of resilience and hope to the book which helps to balance it and adds to the feeling of authenticity and genuineness.
Funder's writing style is engaging, honest and lively - you can clearly see each of the people as they tell their stories and Funder has a lovely sense of humour which comes across as nice relief in some stages of the book.
I would recommend this book to anyone that has a slight interest in this period of history - it has certainly added to my knowledge and understand and has only left me wanting to learn more.
Posted by Karen at 5:26 PM

Hey there! I know this is kind of off-topic however I
needed to ask. Does managing a well-established website like yours require a large amount of work?
I'm completely new to running a blog however I do write in my journal every day. I'd like to start
a blog so I can share my personal experience and feelings online.
Please let me know if you have any kind of suggestions or tips for new aspiring bloggers.

Nice post. I was checking continuously this blog and I'm impressed! Extremely helpful information specifically the last part :) I care for such info a lot. I was looking for this particular info for a very long time. Thank you and best of luck.
Feel free to visit my site ... best diet plan

my web page: diets that work for women

Hello colleagues, good piece of writing and fastidious urging
commented at this place, I am genuinely enjoying by these.


Here is my page :: diet plan for women
Also see my site > diet plans for women to lose weight

Very quickly this website will be famous among all blog visitors,
due to it's pleasant articles

Feel free to visit my web blog; diets that work

Hello there! This post couldn't be written much better! Looking through this article reminds me of my previous roommate! He always kept preaching about this. I'll forward this information to him.
Pretty sure he will have a good read. I appreciate you for sharing!


Here is my webpage: buy solar panels for home

I am regular reader, how are you everybody? This post posted at this web site is truly fastidious.


Have a look at my web page; online airplane games

Hi there just wanted to give you a quick heads up and let you
know a few of the images aren't loading correctly. I'm not
sure why but I think its a linking issue. I've tried it in two different internet browsers and both show the same outcome.

Also visit my website: how to get rid Of stretch marks

Right away I am going to do my breakfast, after having my
breakfast coming over again to read other news.

I've just finished this very interesting book (in French) & I'll send you my post when ready. Meanwhile I recommend you the book by the German author Eugen Ruge " In times of Fading Light" coming out in English in July 2013: a very good story of an east-german family through four generations: amazing. Try it.

I pay a quick visit everyday some web sites and
sites to read posts, however this weblog offers feature based posts.


Feel free to surf to my web site; http://www.goldplatinumjewelry.net/picking-out-swift-plans-of-modcloth-coupon/

Hiya! I simply wish to give a huge thumbs up for the great data you’ve got right
here on this post. I shall be coming again to your blog for extra soon.

Hey! I simply want to give an enormous thumbs up for the good information you’ve got right here on this post.
I will probably be coming back to your blog for extra soon.

I coupon. But not so incredibly. I only clip for what I'd buy in any case. Indeed, occasionally that's processed, but my whole
cart isn't loaded up with it. And each after in a while I am capable to seek out a coupon for your wholesome things I buy each trip in any case. It will save time even though clipping and pressure in the retailer. Free doesn't usually equal good.

Over here it is probably anything close to blasphemy,
but I know that more than in Italy some females get a spoonful of
olive oil numerous times a day to support their complexion, if
that helps?

Hi there! I just want to give an enormous thumbs up for the great info you’ve here on this post.
I might be coming again to your blog for extra soon.