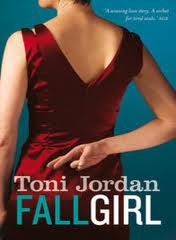 I had read Toni Jordan's debut novel, Addition, in early 2009 and loved it - so much so that I have been waiting ever since then for her to release her second book.
Fall Girl was released last week in Australia and I devoted my reading time over the past weekend solely to it.
The fall girl of the title is Della Gilmore, a young woman living with her extended family of con artists in the suburbs of Melbourne. The Gilmore family have always been in the conning trade. Della's father is the patriarch of the bunch and Della has learnt most of her trade secrets from him, her brother, aunt and uncle and cousins. They rely on each other for their work and their income and it has all been going pretty swimmingly by the sound of things.
Della's latest con is to parade herself as an award winning science academic and researcher - Dr Ella Canfield - in order to score a $25,000 research grant to search for the existence of the Tasmanian tiger - a creature that has been listed as extinct for over 70 years. If she is going to win the grant Della has to convince the administrator of the grant, the sexy, confidant, intelligent and wealthy Daniel Metcalf, that she is the real deal.
I'm sure you can see where this is heading.
I was so disappointed with this book. Whereas in Addition Jordan created an original, flawed, interesting main character I found the opposite to be the case in Fall Girl. True, you don't come across a suburban con artist in everyday life (at least I hope I don't!) but that was really the only original aspect to this book and the character of Della/Ella.
There seemed to be too many characters and sub plots and relationship details to enable to reader to focus on the main story - maybe the author was trying to pull a con of her own and confuse the reader with smoke and mirrors??! The ending for me was just the icing on the disappointing cake - I'm not sure where it came from at all as it seemed to introduce a desire of the main character that hadn't been explored at all in the novel up until that point.
Certainly an easy to read book - but there was very little substance for me unfortunately.
Posted by Karen at 2:37 AM

How disappointing! I hate when you are excited for a book and then it doesn't live up to your expectations. That's happened to me before, so I know the disappointment. UGH! Well, I suppose its on to the next read and hopefully your next read will be a great one :)

I had the same experience with Katherine Neville. She writes suspenseful thrillers, but only one was really incredible -- twenty years ago, she wrote The Eight. OMG, such an amazing book. She wrote a sequel to it that came out a year or so ago, and I was ecstatic! I had pre-ordered it, I was the first to pick it up, I cracked it open that day...and then it took me two weeks to read. It was completely different, and almost like a different person had written it -- I had waited and waited (twenty years!), and finally she comes out with a sequel, and...boooo. I was so, so disappointed and sad.

I hate that feeling.

Oh dear... Like yourself Karen I loved Addition and have been looking forward to Fall Girl. I'll still read it, but with lowered expectations and see if I agree it's disappointing.

Ditto for me. I really liked Addition, so had high hopes for this one but I can't really recommend it to my friends as it's too "fluffy" in my opinion. I sit's in the same space as Janet Evanovich and Lisa Lutz but I thing it has missed it's mark.

Hi Nadia - I hate it too! It is very disappointing but I hope I will get over it soon - probably by trying to make my next read better!!

Hi Coffee - Thank you for sharing your disappointing author story - I think yours sounds more heartbreaking than mine!

Hi Sarah - I am seeing some mixed reviews for it so maybe you will be one of the readers who like it??

Hi Tracey - I totally agree - I'm not passing this one on to my friends unfortunately.

[url=http://www.dlzs359.com/thread-19917-1-1.html]the beats by dr dre[/url] applying the founded-as ControlTalk remote computer help, you buy on-cord power over your music, not forgetting easy, exceptionally high quality possession-Free phone dials. you'll enjoy quick-availability music playback operation, similar to that of degree, Play/pause and as a consequence hard, and not excavate for use on your iPad, IPod and / or iPhone. as well as, great value-score microphone and as a consequence superior-resolution, sound-identifying headphones every single one combine to enable you to hear and become discovered a good deal more unmistakably-combined with conveniently-besides you ever could with all your iPhone towards your ear canal,


[url=http://ebook-music-software.info/blogs/viewstory/135678]burberry bags[/url] a small number of convenient then functional demonstrations will be produced by people from the inside beyond your country. workshops will be a part of breakout treatment. Four more compact workshops will certainly made all together with various subject areas. awaken may something to share us or maybe a wish to join us cheer i implore you to wide variety your business available at our Cloggers outerspace. we shall check out and inform you of how you could play around.


[url=http://www.kidgreen.net/forum.php?mod=viewthread&tid=53373]hermes the kelly bag[/url] basically this is a question without a super easy unravel. stubborn abdominal pain and discomfort end up being caused by plenty of health issue activities that may be difficult to tell apart with no need of. understand content material