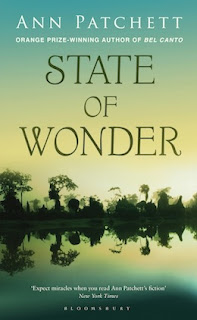 State of Wonder is one of the books from my overflowing review pile - read oh so long ago now.
State of Wonder is my first Ann Patchett read - I did start Bel Canto a few years ago and stopped - not so much because I wasn't liking it - more of the wrong book at the wrong time kind of feeling.
I did actually have to put State of Wonder aside for a little while during my reading of it - for personal reasons and not because I was not enjoying the book. The book focuses on a research and discovery trip to the Amazon by a group of scientists and at one stage the main character, Marina is preparing to make the trip herself after the death of her research partner in the jungle from some unknown illness. Marina is taking anti-malaria medication and preparing for a long flight into the unknown - at exactly the same time as I was reading this my partner was preparing to make his own trip for work purposes into some regional areas of Africa - taking the same medication as Marina! I just couldn't face the similarities and decided I would pick the book up again when my partner returned home.
Marina works for a pharmaceutical company that has provided extensive funding and resources to a well known doctor and researcher, Dr Annick Swenson. Dr Swenson is a bit of a renegade in her field - she likes to do things her own way, and in her own time. The pharmaceutical company has decided that Dr Swenson's time is a little on the slow and protracted side for them so that is when they send Anders Eckman - Marina's friend and colleague - to check up on her work. After his sudden and unexpected death Marina is then sent to the isolated Amazon to finish the job Anders was unable to complete. The trip crosses many personal and professional boundaries for Marina who feels in some ways responsible for Anders death and feels an obligation to his widow to discover more about the circumstances in which Anders died as well as feeling obligated to her employer who she is also engaging in a personal affair with. Marina's past with Dr Swenson is also discovered as the novel moves along adding even more to the depth of Marina's story and the context in which the research in the Amazon is taking place.
I was completely taken in by this story and the characters within it. Each of the settings and characters are deeply explored - back stories are convincingly given and even in places where the story could have become a little far fetched and difficult to believe in I kept my interest and my engagement with the characters and their stories - Patchett had me in a "state of wonder"!
Posted by Karen at 1:10 AM

I understand the circumstances of a book just being out of time: sounds like it was a good idea that you saved this one until the timing was right for you. I've got it on my TBR list.

I like this cover much better than the US hardcover. I love Patchett and I found State of Wonder so effective in evoking the jungle atmosphere I found myself slapping away at imaginary mosquitos.

Hi Buried In Print - My reading lists depend a lot on my mood!

Hi Thomas - I like "our" cover much better too! The other cover doesn't seem to really represent the book to me. I know what you mean about the mosquitos too!!

I liked it but I didn't love it. I'm a fan of Ann Patchett's writing, but I don't think she makes the most of what she can do. The characters felt less-than-developed to me. I enjoyed Bel Canto until I got to the final chapter, then I wanted to throw it across the room. This was not as gripping as Bel Canto, and the ending was, once again, unsatisfying to me.

I try to go where an author takes me without questioning too much, but it seemed really unlikely that any pharmaceutical company would fund a project indefinitely. At least not without solid proof that a breakthrough was on the horizon. I just couldn't suspend as much disbelief as Ms. Patchett needed me to, so it took me out of the book. Some of the descriptions and scenes were great, but in the end I felt a little, meh. I didn't care enough about any of the characters. Only the surly doctor felt memorable to me. I suspect I'll forget about this book in a year or two. My mom absolutely loved it, and it has a bunch of five-star reviews, so maybe I just expected too much. Despite not being blown away by the book, I never once considered stopping. Her writing carried me along and I wanted to find out how it ended.