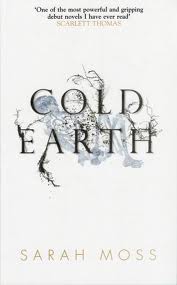 Sarah Moss has quickly become one of my favourite authors. After reading her latest book, Night Waking, a few weeks ago I rushed to pick up her first novel Cold Earth and while it is a very different book in many ways, the style and tension that I had loved so much in Night Waking was still there.
Cold Earth is the story of a group of archaeologists who are on a study/research dig at one of the lost Viking settlements in Greenland. The use of place and setting in Moss' writing is integral to her story and she sets up the starkness of the Greenland countryside beautifully. The setting is contrasted with the isolation and internal struggles of each of the characters and the way the book is written - with alternate chapters told from the perspective of each of them - allows us to see into their thoughts while at the same time seeing different viewpoints and reactions to the same events. The tension in the story comes from the news that was received by the group just prior to leaving for Greenland. A lethal virus has been identified in America and is seemingly spreading across the globe. While the group are in Greenland they have limited access to news from the outside world and when this is unexpectedly cut off each character starts to reflect on what might be happening to their own family and friends left behind.
This was an amazing story to be caught up in - Moss builds the tension perfectly while at the same time staying true to each of the characters and their back stories. One of the reasons I love her writing so much is the depth she attributes to each of her characters - I could read a separate book about each of the characters in Cold Earth - they are that well written and established. Looking forward to much more from Moss in the future.﻿
Posted by Karen at 4:16 PM

I'm so pleased that you enjoyed this one. In many ways the plot of this one appeals to me much more than Night Waking and since I loved Night Waking I'm really looking forward to Cold Earth.

This book sounds like just the kind of thing I've got to get my hands on ASAP! I've never been that big in to vikings, but I LOVE archaeology/anthropology in books, so maybe it's time to cut my teeth with the Vikings. Can't wait to pick it up!
- Chelsea

Hi Jackie - I think you would really enjoy this one - look forward to hearing what you think!

Hi Chelsea - this sounds like the perfect read for you with all of those interests! As I said, they aren't really things that I am in to myself but I found the book amazing so I am sure you would enjoy it.