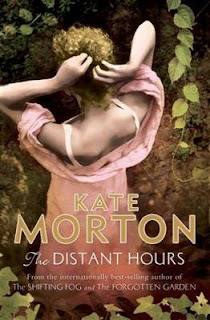 Kate Morton has her winning formula and her latest book, The Distant Hours, shows she's sticking to it - and why wouldn't she? It's creating one bestseller after the other. As in her two previous books, The Shifting Fog and The Forgotten Garden Morton weaves together story lines from the present and past, has a heroine in each time period - each more lovelorn than the other, sets the majority of the book in a beautiful and historical part of the English countryside and throws in a long lost secret (usually involving the writing of a letter or a book) to be uncovered.
Now that I think about it - it definitely does sound like a winning formula - at least it was for me in relation to the first two books, unfortunately for The Distant Hours the formula has now become a little boring and predictable.
The heroines in The Distant Hours are varied and numerous, the two main ones being Edith (Edie)Burchill a young woman working for the publishing business in London in the present day and Juniper Blythe, a talented and ethereal woman who goes to London at the outset of World War 2 and falls in love. These two characters are brought together by Edie's mother, Meredith, who at the start of the war is sent to the countryside as part of the evacuation of children from London to stay with Juniper's family in their family home, Milderhurst Castle. Juniper's father is the world famous children's author, Raymond Blythe and his impact on Juniper and her two older half-sisters, Persephone and Seraphina is felt by Meredith and later relayed to Edie who stumbles upon the castle in the present day and thereby bringing the connection full circle.
The Distant Hours was a compelling and easy read - it is a large book at 499 pages but I found myself half way through it in almost no time at all - the problem being that I never felt as though anything of any significance was happening. I felt I had worked out the formula, and therefore the conclusion, very early on in the piece and the characters themselves were too stereotypical and predictable to interest me.
Definitely a great holiday read for when you just want to tune out and not have to work too hard with your reading but if you are after substance and originality it might be best to look elsewhere.
Posted by Karen at 1:52 AM

I love Kate Morton's books, think I might ask for this from Santa!

It's such a shame you weren't keen on The Distant Hours, as I really liked her other two books.

Hi Dot - it is a gorgeous looking book and would be a great Christmas read I think.

Hi book caterpillar - I really enjoyed her first two books as well - I wouldn't exactly say I didn't like this one - it just wasn't earth shattering for me.

I am very much looking forward to this one! Hadn't seen that cover before though.

This is one of my Christmas presents- sounds like a perfect Boxing Day read (too many relatives means no time to read on Christmas Day for me)!

I get nervous when I see the word 'formula' in a review! The Forgotten Garden was great, but I think I'll read her first book next...

Oh what a shame that it wasn't as enthralling as her other ones! The only novel that I've read of hers is The House at Riverton, which I just loved. I need to read the next one, but will bear your review in mind. Thanks for always posting honest reviews!

I was on the fence about putting this on hold at the library. You've convinced me to save it for another time!

Hi Marg - It is a gorgeous looking books - would make a lovely present.

Hi sam - I'm sure you will have a wonderful Boxing Day with this one!

Hi JoAnn - I think her first book is far and away her best.

Hi Coffee - thanks for your feedback! I really did want to love this one - it has so much about it that I normally really enjoy but I just didn't think it was up to her earlier standards.

Hi cousinsread - Glad I could help!

I'm reading this book right now and I'm enjoying it but I haven't read the other two yet. I'm only about a 5th of the way in so I'll pop back and let you know what I thought when I have finshed.

Hi The Book Whisperer - really looking forward to hearing what you think of this one - especially as you haven't read her previous ones.

I read and reviewed this recently and like you I felt something was lacking (a bit of editing wouldn't have gone amiss!). I did enjoy it but it was a bit of a lazy read for me and I did prefer her earlier novels. Maybe it's time to change the formula!

I've been browsing online more than 3 hours today, yet I never found any interesting article like yours. It is pretty worth enough for me. In my opinion, if all webmasters and bloggers made good content as you did, the internet will be much more useful than ever before.

Here is my blog - diets that work fast for women

Howdy this is kinda of off topic but I was wondering if blogs use WYSIWYG editors or if
you have to manually code with HTML. I'm starting a blog soon but have no coding experience so I wanted to get advice from someone with experience. Any help would be greatly appreciated!

After I originally left a comment I seem to have clicked the -Notify me when new
comments are added- checkbox and now whenever a comment is added I receive 4
emails with the same comment. Is there a means
you can remove me from that service? Cheers!

magnificent publish, very informative. I ponder why the opposite
experts of this sector do not understand this.
You should continue your writing. I'm sure, you have a huge readers' base already!

my web site - packet of fiber

Oh my goodness! Incredible article dude! Many thanks, However I am encountering
issues with your RSS. I don't understand the reason why I am unable to join it. Is there anybody else getting identical RSS issues? Anyone that knows the solution can you kindly respond? Thanks!!

Creative Banner is a focusing fact for any kinds of business institutions. Banner show your products identity which is provided by you. Manage your banner design service creatively by any professional designer to highlight your products. Cr eative banner grabs your customer’s attention.

Photo Retouching is one of the most impressive services in photo editing. It helps to bring a positive vibe and look on the photos. Most of the end-level users are in great needs of Photo Retouching Services. But you need to be careful while selecting the best one.
Chat conversation end
Type a message...