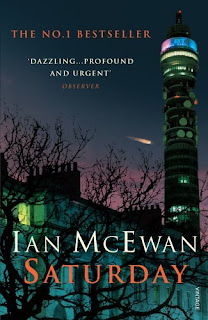 I have continued my Ian McEwan fest this week by reading Saturday, his novel that focuses on one Saturday in the life of London based neurosurgeon, Henry Perowne.

The personal and the political collide in this novel as it is set after the tense period of 9/11 and on the day that millions took to the streets to protest the predicted invasion of Iraq by the allied forces. In amongst this political activity is the "normal" Saturday routine of Henry as he looks forward to playing squash with a colleague, check in on the condition of his patients, attend to his roles as parent and husband and prepare a meal for a family reunion that will take place at his house later that night.
Except it is evident from the beginning that this Saturday is possibly not going to follow the regular path when Henry is, for some unknown reason, woken very early to witness a burning plane from his bedroom window.

The narrative of the novel weaves between the action taking place on the Saturday in question to Henry's memories and recollections of his recent and not so recent past. It is in this way that we learn about Henry's wife, Rosalind and his two adult children, Daisy and Theo and the significant parts they play in Henry's life. We also learn about Henry's job as a neurosurgeon and the passion and commitment he has for this role. Apparently McEwan spent two years following an actual neurosurgeon around watching him at his job and this clearly shows in the detail and precision McEwan conveys about neurosurgery in the book.

I quite enjoyed this particular detail (I have worked in a neurosurgery ward of a major hospital and it was a joy to see the area detailed so accurately) however some of the other intense details portrayed in the book (such as learning step by step how to make a fish stew!) I could have done without.

McEwan built the tension in this story wonderfully - the balance between what was happening in Henry's day corresponded nicely with what was happening in greater London at the time and it was clear that something was building to crisis point which kept me hooked into the story. I was left wondering if it was all just a little too dramatic though??

I'm still a huge McEwan fan - he builds and tells fantastic stories and characters - I might just take a break for a little while and read something a little less threatening to the heart!
Posted by Karen at 1:43 AM

I loved this book (pre-blog). So glad that you enjoyed it, too.

Hi ds - He is a fantastic author - so detailed and into his stories.

I really like McEwan as you might now, this is the only book of his I have tried and failed with. I just couldnt get into it for some reason. This was a few years ago so maybe its time to try it again?