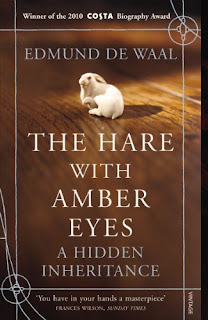 The Hare with Amber Eyes is one of those books I have been hearing/reading/seeing lots of little tid bits about but I hadn't actually read a comprehensive review of the book when I picked it up for myself. After finishing it I can imagine it being one of those books that you either fall in love with - or you don't. I am definitely in the "fallen" category!
The Hare with Amber Eyes is the story of a collection of netsuke - small, ornamental Japanese carvings which were originally collected by a member of the author's family in Paris in the 1800's. The book tells the story of how the netsuke collection were handed down among the generations of the family until the author himself came across them in the home of his great uncle in Tokyo in the 1960's. I actually first thought the premise of the book sounded a little dull - how much story could there really be behind a collection of figurines??  It turns out - quite a big one. de Waal writes beautifully about the history of his family during two world wars, Hitler's rise to power and the persecution of the Jewish people and how the family hangs on to the netsuke, a final symbol of their wealth and prosperity. The geographic range of the story helps to make the book even more captivating as you are taken through Paris, Vienna and Tokyo.
The beginning and ending are definitely the strongest parts of the book and although some of the middle bits sagged a little for me I was still hooked by this story and the way in which it was told.
Posted by Karen at 6:56 PM

I think you have to be in the right mood to enjoy this. I started reading it and knew it would entice me some day, but the timing wasn't right. I will definitely try it again one day!

I have this evil plan to get my bookclub to choose something already in my TBR. I carefully selected 6 books to pitch and this was one of them. Do you think it could make an interesting discussion?

Hi Anbolyn - I totally agree with you - I think I could have picked this book up at another time and hated it!

Hi Alex - I think this would be a good book for a bookclub - I would imagine it would divide readers which always makes for good discussion!

I do not know whether it's just me or if everybody else experiencing problems with your blog. It appears as if some of the written text within your content are running off the screen. Can somebody else please comment and let me know if this is happening to them too? This may be a problem with my internet browser because I've had
this happen before. Thank you

Thanks for sharing your thoughts about safe hgh booster. Regards

Pretty! This was an extremely wonderful post.
Many thanks for providing these details.

Hi, I wish for to subscribe for this weblog to take latest updates, thus where can i do it please help.


Look at my blog post :: hardwood floors
My webpage: flooring

Woah! I'm really loving the template/theme of this website. It's simple,
yet effective. A lot of times it's hard to get that "perfect balance" between usability and appearance. I must say you have done a awesome job with this. In addition, the blog loads very fast for me on Internet explorer. Excellent Blog!

Here is my web blog :: Http://poznane.pl

It's really a nice and useful piece of info. I am happy that you just shared this helpful information with us. Please stay us informed like this. Thanks for sharing.

My blog :: relic watch for men

My sis instructed me about your web site and how great it is.
She’s right, I'm actually impressed with the writing and slick design. It seems to me you’re simply scratching the surface in terms of what you can accomplish, but you’re off to an amazing start!

Feel free to visit my web page - tips to get pregnant

Magnificent goods from you, man. I have understand your stuff previous to and you are
just too fantastic. I actually like what you've acquired here, certainly like what you're stating and the way in which you say
it. You make it entertaining and you still take
care of to keep it sensible. I can't wait to read far more from you. This is really a tremendous website.

Right now it looks like Movable Type is the best blogging platform out there right now.
(from what I've read) Is that what you're using on your blog?

Unquestionably believe that which you said. Your favorite reason appeared to be on the internet the easiest thing to be aware of.

I say to you, I certainly get annoyed while people think about worries that they just don't know about. You managed to hit the nail upon the top as well as defined out the whole thing without having side effect , people could take a signal. Will likely be back to get more. Thanks