No and Me - Delphine De Vigan 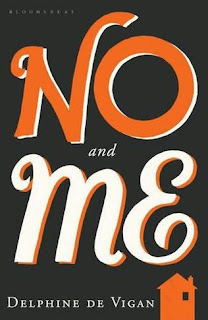 My read for Paris in July this week took me to another side of Paris - the side that as a tourist you might come face to face with but not necessarily think a lot about - or do anything to help - the issue of homelessness.
No and Me is the story of 13 year old Lou Bertignac - a bright Paris school girl dealing with the collapse of her family after the sudden death of her baby sister. Lou is extremely intelligent but struggles at school when it comes to making friends and fitting in. As part of a social sciences project for school Lou starts to conduct interviews with a young girl she has met at one of the metro stations. No is an adolescent who has been homeless for some years following the break down of her family life. She has established a tough exterior in order to survive on the streets but inside she is a teenager with hopes and fears. Lou and No tentatively build their friendship until Lou approaches her parents to ask them if No can come and live with them.
This was wonderful, if at times sad, story of the connection between the two girls but it also had a much broader message about the issue of homelessness in Paris (and the world in general) and through the character of Lou the social conscience of the book is able to come through;

I thought to myself that if everyone took in a homeless person, if everyone decided to look after just one person, to help them and be with them, perhaps there'd be fewer of them in the streets. My father told me that wouldn't work. Things are always more complicated than they seem. Things are what they are, and there are lots of things you can't do anything about. You probably have to accept that if you want to become an adult. We can send supersonic planes and rockets into space, and identify a criminal from a hair or a tiny flake of skin, and grow a tomato you can keep in the fridge for three weeks without it getting a wrinkle, and store millions of pieces of information on a tiny chip. Yet we're capable of letting people die in the street.﻿
Posted by Karen at 10:02 PM

French detective fiction - Gaston Leroux (author of the Phantom of the Opera) and The mystery of the yellow room.
http://mysecretrobotarmy.blogspot.com/2011/07/july-in-paris-gaston-leroux.html

I've looked forward to reading your review of this ever since I saw the cover posted in your sidebar. It sounds like a very good read!

I just finished this book a couple of days ago. It was so beautifully written. I'm glad you liked it too!

Lovely review; it is wonderful to see a character with a social conscience.

This is my odd melange for this week:http://thirdstoreywindow.blogspot.com/2011/07/of-weather-tour-de-france-and-irony.html

I ordered that book to read from Alibris but I haven't received it yet. Sounds like a good one to read. I agree with your thoughts about caring for the homeless. I have worked in shelters helping to feed them. I definitely will read this book since it sea different than most.

Hi Curvy Kitty - Thanks for your link!

Hi Her Royal Orangeness - It is a great read, it is still lingering which is always a sign of a great book for me.

Hi Nari - It sounds like there are quite a few of us who have enjoyed this one!

Hi ds - Thanks for your link!

Hi Brenda - I hope you get your copy of the book soon. I have worked supporting homeless people too but I always feel as though there is so much more that I could/should be doing...

I'm so glad you reviewed this. I found the sheer number of homeless people in Paris perhaps the most shocking thing about the city. I think it is, surprisingly, more hidden away in the likes of London, Manchester, etc.

In Paris, a guy lives on the pavement outside the Cartier shop, which is such a stark contrast between rich and poor. We used to step over sleeping bodies on the metro grills on the way to the Opera Garnier...

Hi Relish - thank you so much for your comment and for pointing out what a stark contrast there is between the wealthy and privledged and those who might be struggling. It is similar - although maybe not so pronounced here in Australia.

Hi there would you mind letting me know which web host you're working with? I've
loaded your blog in 3 different browsers
and I must say this blog loads a lot faster then most.
Can you recommend a good hosting provider at a fair price?
Thanks, I appreciate it!

Hello There. I found your blog the usage of msn.

That is a very neatly written article. I'll make sure to bookmark it and return to read more of your useful information. Thank you for the post. I will definitely comeback.

I was recommended this website by my cousin. I am not sure whether this post is written by him as nobody
else know such detailed about my trouble. You're wonderful! Thanks!

Here is my weblog - blackhat seo

Thanks for your marvelous posting! I actually enjoyed reading it, you may be a
great author.I will ensure that I bookmark your blog and may come back in the
future. I want to encourage continue your great work, have
a nice day!

Aw, this was an incredibly good post. Taking the time and actual effort
to make a superb article… but what can I say… I
put things off a whole lot and don't manage to get nearly anything done.

It's actually very complicated in this busy life to listen news on TV, thus I just use internet for that purpose, and get the most up-to-date news.

Take a look at my web-site: forgottenjokes.com

Thanks designed for sharing such a good idea, article
is fastidious, thats why i have read it completely

excellent submit, very informative. I'm wondering why the other specialists of this sector do not understand this. You must proceed your writing. I'm confident,
you've a huge readers' base already!

Here is my webpage - mcraft4fun.de