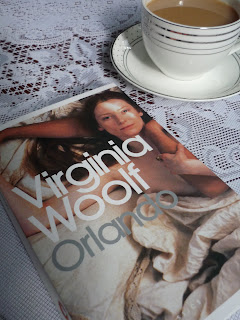 Orlando was the third read for the Woolf In Winter Read Along with this particular read being hosted by Frances at Nonsuch Book.
Woolf has described Orlando as a "Writer's Holiday" for herself and I felt it was also a sort of "reader's holiday" for me in terms of my Woolf reading. Not that I haven't totally loved and enjoyed my earlier reads but the intense focus on her characters inner lives and thoughts is draining to read - enlightening and amazing, but draining as well. I found Orlando to be an extremely entertaining read - a great story and a fascinating character to follow.
I feel this is another Woolf book where it really would have helped my appreciation of the novel to have a deeper and fuller understanding of Woolf's life and in particular her relationship with Vita Sackville-West, for whom Orlando was written. Overall though that lack of knowledge did not impede me from loving the story - and especially the freedom with which it was written.
Orlando starts life as a young boy in sixteenth-century England and moves through the ages to end up being a woman writer in 1928. The whole concept sounds so fantastical but Woolf makes it work. Before starting the book I was eager to read how Woolf would create this transformation in gender and I really liked the scene where this occurred:
We are, therefore, now left entirely alone in the room with the sleeping Orlando and the trumpeters. The trumpeters, ranging themselves side by side in order, blow one terrific blast -
'THE TRUTH!'
at which Orlando woke.
He stretched himself. He rose. He stood upright in complete nakedness before us, and while the trumpets pealed Truth! Truth! Truth! we have no choice left but confess - he was a woman.
Woolf goes on to write:
Orlando had become a woman - there is no denying it. But in every other respect, Orlando remained precisely as he had been. The change of sex, though it altered their future, did nothing whatever to alter their identity.
For me this is one of the most important paragraphs of the novel - the premise that sex or gender is in many ways irrelevant to a person's identity and character. Quite a powerful concept for the time in which Woolf is writing.
I loved Orlando as I have loved my earlier Woolf reads but I particuarly enjoyed the slight break from the intensity that Orlando delivered - I'm ready for The Waves now!
Posted by Karen at 2:25 PM

"...the premise that sex or gender is in many ways irrelevant to a person's identity and character. Quite a powerful concept for the time in which Woolf is writing."

Absolutely. This novel is so rich for something that was to be a break, something easy and quick. Glad you enjoyed it as much as I did. But you know what Karen? Our vacation is over. :) Off to The Waves. I started reading early.

I should have joined in the reading--I've read only a smattering of Woolf's books and I think I would get more out of them in a group read. I'll be following along anyway. Have you seen the movie of this? Good luck with The Waves--I've heard that is a challenging read.

(I love your new banner by the way--so lovely and green).

A break indeed! I'm also ready for The Waves now, after this. I have the same edition as yours and I found it really helpful in understanding Woolf and Vita. I had no previous knowledge of their dynamics but the introduction and the notes in particular allowed me to see the meanings behind everything, which was enriching. Good luck to us with The Waves.. yikes. :)

The freedom does strike one, doesn't it? And I'm glad you enjoyed the slight mental break, and Woolf's thought-provoking playfulness around gender. Yay!

I'm loving the read-a-thon through your reviews. Thanks. This one sounds like am amazing journey through time and character. Could be tempted to pick it up one day. Keep up the great work with the challenge.

Wow, Virginia Woolf was such a brilliant superhero author - what couldn't she accomplish, no matter how challenging and beyond her time? I can't wait to read this one!

Hi Frances - I'm really looking forward to The Waves - and you are so right, the more I reflect on Orlando the more I see that while it may have been a break in terms of style it certainly still maintained strong context and content.

Hi Danielle - I have definitely got more out of my reading for being able to read everyone elses comments and reflections. I haven't seen Orlando - is it good?

Hi Claire - I have found all of the introductions and notes very helpful in terms of my Woolf reading (although I must admit I always get a bit lazy with reading the notes towards the end - I just want to get on with the story itself!).

Hi Emily - Freedom is definitely a word I associate with this novel. Imagine feeling so confidant in your writing ability to attempt something like this? Although I note that Woolf did have some doubts...

Hi T - If you ever want to borrow just let me know!

Hi stockdove - you are reading my thoughts about Woolf exactly! An amazing talent.