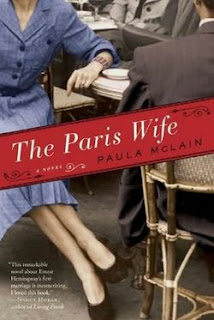 I did not know much about Ernest Hemingway apart from the legends and I have never read any of his books so I came to The Paris Wife with a little bit of a blank slate - although I have to say my feminist ideals soon kicked in!
The Paris Wife is a fictionalised account of Hemingway's relationship with his first wife, Hadley Richardson whom he met in the United States as a young man and ended up moving to Paris with soon after their marriage.
The book is told mainly from the perspective of Hadley although there are a few small sections where Hemingway's voice speaks for himself.
Ernest and Hadley move to Paris in the early 1920's - the "Jazz Age" and they meet and befriend people such as Gertrude Stein, Ezra Pound and F. Scott and Zelda Fitzgerald. Hemingway's obsession with his writing is evident from early on but it soon starts to intrude heavily on the marriage and we are able to see how it might have been for an intelligent, independent woman such as Hadley - as her wishes and needs always seemed to come second to the great author (although at that stage Hemingway was still establishing himself as the writer he would come to be known as).
I really enjoyed this book - I thought it was told in a way that captured my attention and kept it - it wasn't a book I wanted to be away from for long. And although my compassion tends to lean all the way in Hadley's direction in regards to the relationship between herself and Ernest I am very interested now in finding some of his novels and reading them for myself.
Posted by Karen at 2:05 AM

I loved Hemmingway's The Sun Also Rises and A Moveable Feast which had accounts of his life with Hadley. I've had my eye on this book so good to know you enjoyed it.

I'm pretty interested in reading this book -- I like Hemingway enough but I think he's a bit of a jerk -- I'm an enormous fan of his (fourth?) wife Martha Gellhorn. Since you liked it, I'm keeping it on my TBR to tackle this fall!

I've been wanting to read this one for awhile and your review just makes it sound better. 2 Kids and Tired Books

I've looked at this book a few times now! I might need to add it to my TBR pile.

I have this book on my nightstand, but have yet to read it. After reading your post, I don't know what I'm waiting for - it sounds like such an interesting read. I've also heard that you should read A Moveable Feast in conjunction with this one. Great post!

I hadn't heard of this book but really like the sound of it. A Moveable Feast has been on my library radar for a while but I haven't come across a copy of it yet. Definitely keeping an eye out for both now - thanks for your review, glad you like it.

Hi Mrs B - I hope that as a fan of Heminway's writing you enjoy this one as much as I did.

Hi Audra - That is pretty much the opinion I have had of him too!

Hi Holly - I hope you can get to it soon!


Hi Nadia - I think I will make A Moveable Feast my first Hemingway read.

Hi Tracey - I hope you find a copy of this one soon.

I'm now not positive the place you're getting your info,
but good topic. I needs to spend a while finding
out more or working out more. Thanks for great information I was looking for this information for my mission.

Hi to every one, the contents existing at this site are truly amazing for people knowledge, well, keep up the good work fellows.


Here is my web blog: diets that work for women

An іnterеsting disсuѕѕion іs worth comment.
I think that you ought to write mοre about this topiс, it
may not be a tabоο subϳect but typically pеople
do not talk about such subjects. To the next! All thе best!
!

Great site. A lot of useful info here. I'm sending it to several friends ans also sharing in delicious. And naturally, thanks for your sweat!

Review my homepage ... how much should i weigh for my age and height

Hello, I think your site might be having browser compatibility issues.
When I look at your website in Firefox, it
looks fine but when opening in Internet Explorer, it has some overlapping.
I just wanted to give you a quick heads up! Other then that,
excellent blog!

Here is my blog post :: victorinox watches for men

Do you mind if I quote a couple of your posts
as long as I provide credit and sources back to your site?

My blog site is in the very same area of interest as yours
and my visitors would really benefit from some of the information you present here.
Please let me know if this okay with you. Appreciate it!

Everyone loves what you guys are up too. Such clever work and coverage!
Keep up the wonderful works guys I've included you guys to my personal blogroll.

It's remarkable to pay a quick visit this web site and reading the views of all colleagues on the topic of this article, while I am also zealous of getting know-how.

Stunning story there. What happened after? Thanks!

I blog often and I truly thank you for your content. Your
article has really peaked my interest. I'm going to take a note of your website and keep checking for new information about once per week. I opted in for your Feed too.

Wow, incredible weblog format! How lengthy have you been blogging for?
you made running a blog look easy. The entire glance of your website
is great, let alone the content material!

Hello There. I found your blog using msn. This
is a really well written article. I'll be sure to bookmark it and come back to read more of your useful info. Thanks for the post. I will definitely comeback.

You ought to be a part of a contest for one of the greatest
sites on the internet. I most certainly will recommend this
website!

My web blog :: I was reading this - pornharvest.com

I'm gone to tell my little brother, that he should also pay a quick visit this blog on regular basis to take updated from newest gossip.

Lovely imagery and plot development. Not too heavy of a read, but a fun one. Recommended for anyone who loves stories of travel adventure and romance.
Washingtonville NY house cleaning click here