The Amazing Adventures of Kavalier and Clay - Michael Chabon 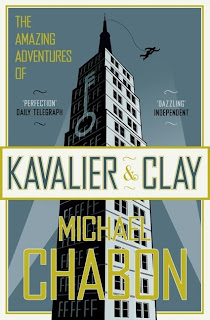 The Amazing Adventures of Kavalier and Clay by Michael Chabon was a book I had chosen to read as part of the New Classics Challenge - a challenge I am grateful for as I have been able to read many books I have heard of before and have thought about picking up but this challenge has helped me go that extra step and actually read some of them. On another note I didn't actually end up finishing the challenge unfortunately - Adventures was my third last book for the challenge and I finished it slightly past the deadline of the 31st January. Never the less - I am pretty happy with my efforts in the challenge - 4 books read and all of these books I had been meaning to read for quite a while. I will claim a small personal level of success for the challenge!
The Amazing Adventures of Kavalier and Clay is indeed an amazing book telling some amazing stories. The central character of the novel is Josef Kavalier, a young Jewish man from Prague who is able to escape his home country at the beginning of World War 2 and travel to the USA where he meets up with his cousin, Sam Clay. The two young men create a comic book superhero - The Escapist - who becomes an extremely popular character symbolically fighting the nazi powers in Europe. The Escapist - largely a product of Joe's imagination and wishful dreaming - is also a way for Joe to fight the evil that has captured his family back in Prague - a place where he has escaped but his heart and mind still truly live in the form of his parents and treasured younger brother, Thomas.
There are very strong motives throughout the book - the notion of escape being uppermost - escape from danger, escape from power, escape from responsibility, escape from love, escape from yourself. I must admit I am usually quite dense at picking out themes in novels (my grades from university english studies will support this!) but I think I was really able to read between the lines in Kavalier and Clay. That's not to say that I am sure I have missed so, so much that the author was trying to portray.
The book is quite long and intense, the writing intricate and the plot weaving. There is quite a bit of in depth description of the American comic book industry of the 1930's onwards - I almost got bogged down in all of this as this is not a world I am familiar with at all - but I was able to move past these parts to the more character driven segments which were the true golden moments for me. Some of the character's reflections were especially beautiful;
Later, after the world had been torn in half, and the Amazing Cavalieri and his blue tuxedo were to be found only in the gilt-edged pages of deluxe photo albums on the coffee tables of the Upper West Side, Joe would sometimes find himself thinking about the pale-blue envelope from Prague. He would try to imagine its contents, wondering what news or sentiments or instructions it might have contained. It was at these times that he began to understand, after all those years of study and performance, of feats and wonders and surprises, the nature of magic. The magician seemed to promise that something torn to bits might be mended without a seam, that what had vanished might reappear, that a scattered handful of doves or dust might be reunited by a word, that a paper rose consumed by fire could be made to bloom from a pile of ash. But everyone knew that it was only an illusion. The true magic of this broken world lay in the ability of the things it contained to vanish, to become so thoroughly lost, that they might never have existed in the first place.
I have to admit, even though I can clearly see the brilliance and the beauty of this book, I struggled with it at times, but, having said that - I am very, very glad I made it to the end. A book that definitely stays with you.
Posted by Karen at 12:49 AM

I loved this book too! I also struggled with the middle section on comic book history, but I'm glad you made it to the end, as the plot driven parts are amazing!
I haven't read any of his others yet, but I'm sure I will soon as I love his writing style.

Hi farmlanebooks - yes, very glad I stuck in there! I now have one of Chabon's other books, The Final Solution, waiting to be read.

Karen, congratulations on your personal success with the challenge and also on your writing - because this review is written so well. And you're not dense on picking up on themes.. you have 'a suitable boy' on your wish list, and I saw it today in a bookshop - wow, that is a real 'chunkster'... I left it on the shelf for now - awaiting your review.

Hi Tamara - thanks for your comments! I tried hard with my review for this one - I know I still have a long way to go but I think I am getting better on trying to get my views about the books across.
A Suitable Boy sure is a chunky one!

This was a great book but very long. This book took me a long time to get through. This was my favorite book of the challenge even though it was the one that didn't let me finish on time. :)

Hi Mari - I agree, this was a long one. I started off very well but it really started to drag for me towards the end even though I still thought it was fantastic.

I've been wanting to read this one for awhile now. I've heard really good things and after reading your review I'm thinking I should go ahead and pick it up. Thanks :)

Hi Samantha - I would definitely recommend it. It's not always easy going but worth it in the end I think.

Like I may have mentioned before I zoomed through to about page 400 with this book and then just seemed to hit the "wall". I found the pacing of the novel changed and I wasn't interested in where Chabon was taking me for a while - eg. to the polar ice cap etc. But I stayed with it to the end and I am glad I did also. My book club is discussing it this weekend and it will be interesting to hear what they thought of it - I know they all struggled with the length too.

Hi Nutmeg - I completely agree - I couldn't get into the ice station scenes at all. It will be interesting to hear what your bookclub thinks of it.

I greatly enjoyed this book, but I must be slow because I cannot understand who shipped the golem crate to Joe at the close of the story. Can someone explain this to me? Thanks. candsmcnamara@comcast.net