So Much For That - Lionel Shriver 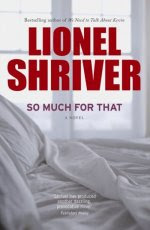 So Much For That is an extremely timely and topical novel to be reading at the moment with so much discussion and change occurring within the health systems both within the USA and Australia. As both a consumer and an employee of the health system in Australia I am keen to dissect these debates further so whilst So Much For That is set within the American system I find it offered some interesting and relevant points for our own current, and possible future, health care system.
Shriver has produced a very blunt and "in your face" narrative with this book. One of the main male characters, Shep Knacker, has reached middle age and his dreams of leaving his middle class existence in New York and moving to a Developing African Island to live out his days are about to come true. He has talked and dreamt and planned of this "After Life" and it is now about to finally come true. Except for one thing, Shep's wife Glynis has just announced she has been diagnosed with a very aggressive type of cancer. Shep and Glynis aren't going anywhere and the course of the novel follows as Glynis's treatment increases and the family bank balance decreases. Sounds like a fun ride doesn't it?? It is a gloomy book in many respects but I thought Shriver did well to balance the real human emotion of facing a terminal illness with the concrete practicalities of searching out treatments that might work and subsequently fighting medical insurance companies to have these treatments paid for. What I thought didn't work so well was the inclusion of Shep's best friend, Jackson whose family is struggling with their own medical issues in the form of their 16 year old daughter who has a very rare degenerative disease. The stories did compliment each other in many ways but for the most part I just felt overloaded as a reader trying to take in two such serious story lines in one gulp.
I am a huge fan of Shriver's writing and her outspoken personality (I am hoping to be able to hear her speak in person at the upcoming Sydney Writer's Festival) and she hasn't let me down with this book. The ending gave me a couple of problems but overall So Much For That is tough, thought provoking, extremely well researched and provocative - just what I want from a Shriver book!
Posted by Karen at 2:55 AM

I wasn't a big fan of this book. I agree that the Jackson family added too many of their own, different problems into the book and I felt this was a contrived way of cramming as many different health care problems into one book. I felt that it was just one long rant about the healthcare system and I got bored by all the policy details. I can see how it would be of more interest to someone working in the healthcare system, so am pleased you managed to get something from it.

I just saw this book reviewed in Bookmarks magazine and immediately added it to my TBR list. Your review has now confirmed that I must read it soon.

I really need to read more Shriver. I read We Need to Talk About Kevin last year, and while I had some issues with its construction, I loved all the tricky issues that Shriver tackled. It sounds like this is very similar in that respect, so I'm sure I'll give it a go at some point!

I just got around to reading your blog today, it's been a busy week, and just wanted to let you know that I love it. Terrific reviews and now I want to read almost all of the books you mention.

I just piked this one up and I am looking forward to reading it. Shriver is such a smart writer than even when she missteps, her writing is still thought provoking.

This sounds like a deep read - maybe deeper than I would go - but like Nicole has said, if Shiver's a Smart writer, it might be a good change for me. Thanks again for expanding my hirozons into new fields. I'll keep an eye out for something of hers.

Hi Jackie - I remember you didn't exactly love this one! It definitely isn't perfect but I think the subject matter kept me into this one - it's an issue I've very interested in.

Hi Molly - I hope you get a lot out of reading this one when you get to it.

Hi Steph - This one is similar to Kevin in some ways although Kevin is still my fave book out of the two.

Hi C.B. James - thank you so much for your comment! I will be dropping by to check out your blog too.

Hi Nicole - she doesn't shy away from the big issues does she? I really like that about her.

Hi T - She definitely looks at some big issues - We May Need to Talk About Kevin is an amazing book - I have a copy if you would like to borrow??