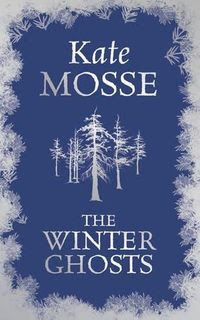 I have had a bit of a hit and miss experience with Kate Mosse's books in the past. I quite enjoyed the first book of hers I read, Labyrinth, but the second, Sepulchre was not a great reading experience for me at all.
I still thought I would give her latest book, The Winter Ghosts, a go. Partly, I will be honest, for it's gorgeous cover design (if I had a dollar for every time I got sucked into reading a book through this way...) and also because it is quite a short book so I figured if it was not great the pain would be over quite quickly.
The Winter Ghosts is told from the perspective of Freddie Watson, a man in his early 20's who was, and is, grief stricken after the death of his older brother, George, in World War 1. The book starts in 1928 when Freddie is travelling around France after the death of his parents - Freddie is still unclear as to whether he wants to remain in the world of the living himself and it is a heartbroken, destroyed man with no hope who we first meet. During his journey Freddie has a car accident during a brutal winter storm close to a village where he seeks assistance. It is here that the real "action" of the book begins when Freddie attends a village fair one evening and meets a young woman by the name of Fabrissa who shares with Freddie her own story of personal loss.
The book reads very much like a type of fairytale or moral fable - the language and story line is quite simple and even the emotions and intentions of the characters are clearly described as opposed to simply being indicated in some subtle way for the reader to ascertain for themselves.
I noticed at the end of the book that Mosse actually wrote an earlier shorter version of this book as part of the 2009 Quick Reads initiative aimed at adult emergent readers. This helped me to understand why the book had been written in the way that it was.
This book certainly didn't blow me away but it was a nice, quick read.
Posted by Karen at 1:13 AM

I wasn't a fan of Labyrinth, so didn't try Sepulchre. The fact this is so simple means that it has no appeal to me. I'm glad I didn't consider getting it.

I have not yet read Kate Mosse, but I could relate to your wish of receiving a dollar for every book purchase determined by the cover design! I do that all that all the time.

Fairy tales and moral fables are my bag, so that part sounds very promising! And I do love that cover.

I actually enjoyed 'Sephulchre', reading it like a old fashioned Gothic novel by the fire on some long winter afternoons. But I haven't read any other book by her.
Nice cover for the latest one.
Let's see!

I too enjoyed Labyrinth but could not even finish Sepulchre! What happened to Kate Mosse?!?!

Thanks for the review of her latest book...I probably will not put forth the effort to get it as it's so short and does not have rave reviews....oh well....perhaps she'll have another "labyrinth" again!

I enjoyed her first book, tried to listen to the second on audio, but just didn't quite get on with it and was wondering about this new one. Not sure if I'll get around to it, but I totally know what you mean but a good cover being so tempting!

Hi Jackie - I definitely think you have made the right decision with this one!

Hi Molly - We would be very wealthy people wouldn't we??!!

Hi Andi - It's a gorgeous cover and I felt that it did match the content beautifully.

Hi Victoria - You might really enjoy this one if you liked Sepulchre.

Hi Stacy - I agree!! Would love to see her come back to her early form.

This article presents clear idea for the new visitors of blogging, that in fact
how to do running a blog.

Hi i am kavin, its my first time to commenting anyplace, when i
read this article i thought i could also create comment due to
this good article.

What i do not realize is in fact how you're now not really a lot more smartly-preferred than you may be right now. You are so intelligent. You recognize thus considerably on the subject of this matter, made me personally believe it from numerous numerous angles. Its like women and men aren't
fascinated unless it is one thing to accomplish with Woman gaga!
Your own stuffs excellent. All the time care for it up!

Attractive section of content. I just stumbled upon your site and in accession capital
to assert that I get in fact enjoyed account your blog posts.
Anyway I'll be subscribing to your feeds and even I achievement you access consistently quickly.

Check out my page pendientedemigracion.ucm.es

Fastidious respond in return of this difficulty with firm arguments and telling
all about that.

It's very simple to find out any topic on net as compared to books, as I found this post at this site.

Feel free to surf to my blog post relic watches

I like the helpful info you provide in your articles. I will bookmark your weblog
and check again here regularly. I'm quite certain I will learn many new stuff right here! Best of luck for the next!

my page - at home business

At this time I am going away to do my breakfast,
later than having my breakfast coming yet again to read additional news.

Thank you, I've recently been searching for information approximately this subject for ages and yours is the best I've found out so
far. However, what concerning the bottom line? Are you positive
about the source?

Simply wish to say your article is as amazing. The
clarity for your put up is simply cool and that i can assume you are
a professional on this subject. Fine together with your permission let me to clutch your feed to stay up to date with imminent post.

Thanks a million and please continue the gratifying work.