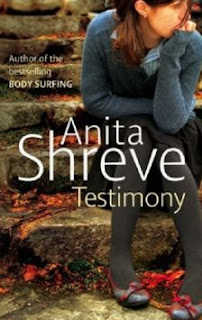 Testimony is a book I have had on my shelf for the longest time - pretty much since it was released in 2008 (in fact I think it was a Christmas present from my parents that year). I must have been waiting for just the right time to read it because when I had a day off from work a few weeks ago I managed to read the whole book in one day, and in pretty much one sitting.
The way Testimony is written and structured encourages the "one sitting" reading. It is narrated alternatively by different characters and as each chapter is read we learn a little bit more of the story from a slightly different angle and with a slightly different focus that just makes us want to keep reading to get the next little piece of the puzzle.
The book is set in an exclusive New England boarding school which is thrown into a scandal when a video tape is discovered and distributed showing several of the students engaged in sex acts - the students being 3 boys and 1 girl (and another student who has captured it all on camera).
The book focuses on telling the story of what happens after the tape has been made public from the viewpoints of the students involved, teachers, parents and other students and community members.
As I was reading this book I found I was thinking about it from different angles myself. As a reader I was impressed with Shreve's ability to build a story and create controversy and debate by having different characters hold very different views and opinions about the acts that had taken place - I think this would be a fantastic book for a reading group to take on. On the the other hand I was also reading it as a feminist, a woman and a social worker who has worked with women and men who have experienced sexual assault and from that perspective I found myself becoming very angry and frustrated with some of the views that were expressed by some of the characters. I think this passion only contributed to my reading experience though as I found myself fully engaged with this book and the final outcome. I'm not sure why I left it on my shelf for so long!
Posted by Karen at 1:57 AM

I listened to the audio version of this book and it was fantastic! I think the mulitple narrators helped me to follow the numerous characters. I agree - the controversial debate was very well handled and I felt very sorry for those boys :-(

This has been on my shelf forever, too. Clearly, I need to take it down and read it.

Anita Shreve has a way of handling sensitive subjects! I must get this one!

I had this on my to-read list when it first came out and I'd completely forgotten about it! Thank you for reminding me. I hear great things about Anita Shreve, but I've actually never read anything of hers before.

I really enjoyed this book as well, and agree that the structure of the book certainly does lend itself very well to a "one sitting read." Very true!

I do like Anita Shreve's writing, I have had a couple of her books on my TBR shelf for a while, it might be time to get them down!

It sounds like an interesting book, and so far all the comments I've read are in the same line as yours. I' think I'll have to give Shreve a try at some point, soon!

Hi Jackie - I was thinking an audio version of this book would have had to have many different narrators or it could have gotten very confusing! I can't say that I exactly felt sorry for the boys though...

Hi JoAnn - I think you should!

Hi Stacy - She is a clever author in many ways - I'm not exactly sure why she isn't taken more seriously.

Hi holubchik - It sounds like a few of us have put this one on our shelves and forgotten about it! I wonder why...

Hi Coffee - I love it when I start reading those types of books and I actually have the time and space to devote to them there and then.

Hi Dot - I think Shreve must be one of the most "shelved" authors by the sounds of things!

Hi Kay - she has plenty of books to keep you going for a while if you find out you enjoy her style!

I loved the only Shreve I read (A Change in Altitude) and have heard many rave about this one. I hope to read it soon!

The story itself is a thrilling ride that will take you on a journey from the very first page to the last. The author's writing style is amazing as she writes in different point of views in every chapter. You get to see what is going on inside of every character's head while learning the details of the plot. The author gives you a true look on the fact that theres always the "other side" to a story. Shreve does not leave you disapointed in the end!