The World Beneath - Cate Kennedy 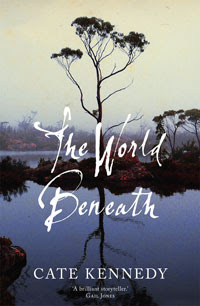 The World Beneath is a perfect example of how award lists can lead to amazing reads. The book is on the short list for the New South Wales Premier's Literary Awards 2010 which I wrote about here.
I am ashamed to say that I had not really heard of Cate Kennedy before seeing her name on the list but I will certainly be keeping an eye out for all of her work from now on.
The World Beneath is a character novel focusing on a fractured family consisting of Sandy, Rich and their 15 year old daughter, Sophie. Sandy and Rich first met when they were young and idealistic and fighting for a cause - in this case the protest against the Franklin River dam in Tasmania in the early 1980's. They stayed together after this cataclysmic event in both their lives but when Sophie was born Rich decided he wasn't quite up for the suburban family life and he left Sandy and Sophie to explore his own life. The World Beneath starts 15 years later when Rich plans a week long bush walk for himself and Sophie as an attempt to reconnect with the daughter he has hardly seen since.
This is an amazing novel that kept me up reading late at night in an attempt to finish it. Kennedy's ability to construct each character separately and also make a character out of their less than functional family unit is incredible - I am in awe of her skill! Each character is clear and raw and flawed - they feel real and because of that I connected with them throughout the story even when there were times when I couldn't stand them!
If you enjoy reading novels where character development and reflection is the main focus than this is book for you - it will have you thinking long after you have finished it.
Posted by Karen at 2:42 AM

I have heard of Cate Kennedy but have never read anything of hers before. I will definitely add this one to my wish list with a link to your review. It sounds amazing

This sounds wonderful. I admit that I've never heard of the author or of the book, but I'll definitely be adding this on to the TBR list!

I just have a totally shallow comment n how gorgeous the cover is. I like books like this so I will keep an eye out for it in the stores.

Nicole I was just about to say the exact same thing!! Beautiful cover!! But also sounds like a great read Karen, I haven't heard of Kate Kennedy either :S

this one sounds alot like my life... I really want to read this sometime. You find books in such interesting ways, but it seems to work. The cover is also a good reason to get it.

Im glad you enjoyed this Karen, like yourself I stayed up to finish it and was amazed by how real the three characters became to me.

This sounds like a great read. Hadn't heard of it before so thank you and now I need to add it to my list!

About Cate Kennedy from Wikipedia:

"She went on to study professional writing in Canberra 'and stopped writing, as everyone does; analysis takes all the joy and mystery out of it'."

This is also my story - apart from the name of the University and the obvious fact that she actually started writing stories again.

Thanks for giving me another book to look out for.

Hi Becky - I really hope you enjoy it as much as I did.

Hi Claire - Glad I could add another Aussie author to your list!

Hi Nicole - I have to agree with you about the cover - just stunning! I know it shouldn't matter but it makes a big difference for me if the cover is beautiful.


Hi Elise - I hope you check her out.

Hi T - I got this one from the library so you should check it out there to see if you can grab it. I think you would really enjoy this one.

Hi adevotedreader - I know what you mean about the characters becoming so real - I think I am still waiting for updates to see how they are doing now!!

Hi Iliana - I hope you enjoy it!

Hi Onesimus - thanks for the info.

I've been surfing online more than 2 hours today, yet I never found any interesting article like yours. It's pretty worth
enough for me. In my view, if all web owners and bloggers made good content as
you did, the internet will be much more useful than ever before.