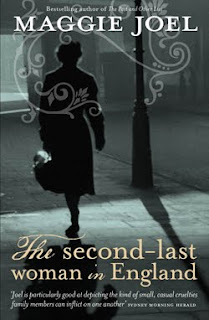 The Second-Last Woman In England was a book that caught my eye when I was browsing last weekend. I certainly didn't need to purchase another book - but when has 'need' ever really been a factor in my purchasing of books??!
I loved the cover, dark and intriguing - tempting me to delve inside. I then followed my pre-book purchasing ritual and read the description of the book on the back cover:
London, 1953. Mrs Harriet Wallis is found guilty of the murder of her husband, Cecil. It is the year of the Coronation and, as a new Queen ascends the throne, Mrs Wallis will become the second-last woman in England to be hanged.

I was definitely on the way to the counter to make a purchase after noticing the book included a few of my favourite things - London, the period after World War 2 and a strong leading female character. I read the first paragraph of the book just to be sure:
Towards the end of May 1953, Mr Cecil Condor Wallis made the decision to watch the Coronation on a newly purchased television set rather than give in to his children's wishes to join the hundreds of thousands lining the streets less than a mile from his South Kensington home. It was an odd decision for a man who had, on a number of occasions, expressed his loathing for the new medium - and one that probably cost him his life. There were, of course, other factors, aside from the decision to purchase the television set, that contributed to Mr Wallis's death.

I was hooked well and truly by this stage - I had to buy the book and discover for myself what those "other factors" were.
The novel focuses on the upper class Wallis family and their private and business lives in the years following World War 2. There are numerous other associated and related characters introduced throughout the story - one of the most important being their newly employed nanny, Jean Corbett. I have always found books that start with the punchline interesting. We know right from the beginning that Harriet Wallace kills her husband, we know when she does it, where she does it and we know how - the vital part missing in the story is the why. I felt that the author did a great job of teasing out the why and showing us the 'behind the scenes' lives of the Wallis family. At times I felt there were probably a few too many side stories and characters - they were all important or significant in a way but they occasionally made you feel as though you were losing touch with the real , or main, story. Overall though I found this book compelling and addictive - I kept reading until I had it finished and time away from it was torture. Joel has created an authentic world in many respects - so much so that I kept wondering throughout my reading if the book was based on a true story (it isn't but it is interesting to hear Joel speak about her inspiration for the novel).
Posted by Karen at 4:10 AM

This sounds wonderful! I love reading about that period too plus the story sounds riveting! That cover is indeed beautiful. It almost seems like it's in 3D.

This sounds good! BookDepository is going to contact me when this is back in stock. Thanks for the recommendation.

This one has a lot of elements I like too so I'll have to be on the look out for it. Sounds wonderful!

my brain thinks "very interesting, must read". quick! log into county library to see if it's available.... no. log into statewide library search.... no. checkout amazon.com.... grrrrrr... NO!!! sigh, living in America does have it's down sides. I'll put this on my 'to be imported' list.

Oh wow...I really want this book!
If I remember correctly, Ruth Ellis was the last woman hanged in England, right? I saw a movie about it a few years ago...Rupert Everett was in it. Thanks so much for the review. Also, that cover is great!

Great Review. This isn't my favourite period, but this sounds really good, so I may keep an eye for this book!

I love that cover and the story sounds wonderful. Sadly though no UK release so I'm hoping the the Book Depository will come through with some copies.

This does sound like a good read. I also love books that start with the punch line, because they why is almost always more interesting than anything else.

This sounds terrific. I have got to track down a copy!

Hi Mrs B - It does look a bit that way doesn't it?? It isn't but it does definitely evoke a kind of 3D look.

Hi Tara - I hope it comes back in soon.

Hi Tribute Books - The inside really matched the cover too I thought.

Hi Iliana - I hope you like it if you get to read it.

Hi Cindy - how frustrating!! I thought those kinds of book frustrations only happened to us in Australia!

Hi Bybee - I'll have to look out for that movie - thanks for mentioning it.

Hi Dot - I hope you can find a copy and that you love it when you do!

Hi Scattie - glad to hear I have tempted you to read this one!

Hi Fleur - that is frustrating!! I hope TBD comes through!

Hi eveningreader - that is so true. I never used to like books like this but I came around!

Hi Holly - I hope you can find it!

Hi there, this weekend is fastidious designed for me, because this moment i am reading this impressive informative article here at my
house.

Hello I am so delighted I found your webpage, I really found you by error, while I
was looking on Google for something else, Anyways I am here now and would just like to say thank you for a fantastic post and
a all round entertaining blog (I also love the theme/design), I don’t have time to go through it all at the moment but I have
bookmarked it and also added in your RSS feeds, so when I have time I
will be back to read a great deal more, Please do keep up the excellent
jo.

Here is my site - Read This method