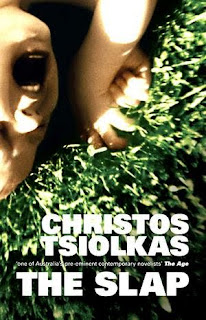 The Slap has already won a stack of prizes and awards and most recently was named on the Man Booker Prize Long List for 2010. The book has also generated a lot of discussion amongst Australian readers, bloggers and literary critics and some of my close friends have read the book and have had very strong views on it - but despite all of this I still hadn't read The Slap myself. I've changed all that now though and I am so glad!
The Slap literally starts with a slap. A group of friends and family are gathered in a Melbourne suburban backyard for a BBQ, a children's game of cricket turns feisty and one of the adults slaps a young child who is not his own. From this action we continue to follow the group as they return to their own homes and carry on with their lives.
The book is told in the voices of different characters in alternate chapters and I felt this was a great narrative technique for this book as it helped us see the event at the BBQ from the viewpoint of different players such as the "slapper" himself, the child's mother, the family whose house the BBQ took place at etc...
This book is so rich in detail and characterisation - I felt each character in this book could have been fleshed out even further and had a book devoted just to them. The suburban world is created fully and I felt as though I could walk down the street the next day and run into any of these characters - they felt that alive and real.
The story itself was brilliant - such a simple concept in many ways but it is so complex in the thoughts, views, opinions and emotions it raises in the characters - and readers. This is a book that stayed with me even when I wasn't reading it - and it has definitely stayed with me now that I have finished it. For me, The Slap deserves all of the praise that has come its way - I can't wait to read more from this author.
Posted by Karen at 2:47 AM

I enjoyed this one too :-) I really hope that Tsiolikas produces many more books of this quality :-)

I haven't heard so much about this one, but now I'm intrigued. It is a very straightforward premise, and I'm glad it lived up to the talk.

It's been so interesting reading reviews on this book - some people love it (as you did), while others have had a very negative reaction to it. I personally thought it was a really provocative and interesting read (though not without flaws), and I think it's definitely producing some interesting conversation and debates. I'll be interested to see what Tsiolikas produces next.

This is definitely a book that definitely provokes a strong reaction - either negative or positive. I haven't seen any one think it was just meh!

I am not sure that I want to read it, but one day I am sure I will.

Hi Jackie - I'm looking forward to his next book already!

Hi Andi - It is a great premise for a book - and it works so well in the hands of this author.

Hi Steph - I know what you mean, it is definitely a book that divides its readers! I wonder if coming from an Australian context means it has resonated more with Australian readers??

Hi Marg - I wasn't sure if I wanted to read this one either - but I am definitely glad I have!