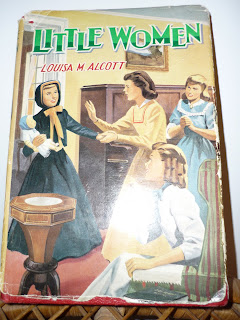 A discussion over dinner with a friend the other night led me to pick up Little Women - a book I had thought I had read before but I think I have actually only ever seen movie versions of the novel. A recent version with Christian Bale playing Laurie is a firm favourite!
I have a gorgeous old copy of the book which belonged to my mother - with a delightfully kitsch cover reminiscent of the 1960's I feel. I can't actually find a publication date anywhere on the book but that would be my guess.
The story, as I'm sure most of you know, is about 4 young girls - Meg, Jo, Beth and Amy and their trials and tribulations growing up in the Boston area during the American Civil War in which their father is involved in as a Chaplain for the Union Army.
The character of Jo is an autobiographical portrait - and to me the most engaging character in the book - feisty, fun and full of life.
As I was coming to the end of the book I realised that some of the significant events that I knew to be a part of the story where not going to happen - no marriages or deaths to be seen. When I looked up the novel through Wikipedia I read that the book was actually originally published in 2 parts - the second part coming along after publishers realised that the first was so popular - and the copy I was reading only consisted of the original first part of the novel.
Feeling very cheated I will have to go looking for the second part - or simply watch the movie again!
Posted by Karen at 1:43 PM

You are definitely going to have to find the other part of the book! Little Women is one of my favorite books of all times! I also really really like the film version with Christian Bale! I'm glad you like it too!

The second part, Good Wives, is definitely worth reading. It still annoys me that Jo and Laurie didn't marry though!

Hi Laura - yes, I will definitely have to find the second half - the story feels totally incomplete!

Hi Sarah - I feel the same way. Apparently the author didn't want Jo to marry at all but the popular opinion of readers was that she should.

That edition is too cute! I don't think I'd be able to read it for fear of destroying it.

Hi Antipodeanowl - it is very cute isn't it??! I think the fact that my mum isn't a big reader means that the book is still in fairly good condition so I feel ok about picking it up!

One of my favorite books!! You must read the second part. There are two sequels, as well, written by Alcott. (As opposed to someone from our century.)