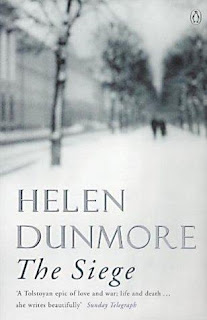 I was led to reading The Siege after the Longlist for the 2010 Man Booker Prize was announced and the follow up book to The Siege, The Betrayal, was nominated.
I am certainly not intending to read all of the books on the Longlist although I do find prize lists really handy in helping to discover new reads that otherwise would have remained unread. The Betrayal caught my eye as a book I would be interested in as World War 2 and the period just before and after it has always been a time in history I have been strongly interested in. I'm not sure why really, I did study that period at school and my dad has always been interested in it too so maybe that is enough to continue to spark my interest. Anyway, me being the obsessive person that I am - I couldn't read The Betrayal knowing that there was a prequel out there - it had to be read first.
Which leads to The Siege - one of the most amazing and incredibly well written novels I have ever read - let alone one that focuses on this time in history.
The Siege covers the period in Leningrad just before and during the German siege of the city when so many people died from starvation and disease. The book takes a broad focus on the city at times but the main way in which the story is told is through the eyes of one family who are struggling to survive physically and psychologically through this period.
Anna is a young woman caring for her younger brother, father and her father's lover as well as starting a new and tentative relationship with a doctor, Andrei, and we follow her as she attempts to find items of food on the ever decreasing rations available as well as heating their apartment and fighting of sickness during the cruel Leningrad winter - it is quite literally a story of survival.
The book is stark and brutal - the descriptions of the hunger and struggles feel so real and frightening and yet they are told simply with little drama or showiness;
The streets are almost empty. She passes the hump of a body frozen into a doorway, covered with drifted snow. It looks like a bag of rubbish, but Anna knows it's a body because she saw it before the snow hid it. It's an old woman. Maybe she stopped to rest on the way back from fetching her ration. Anna doesn't like going past the park anymore. There are people sitting on benches, swathed in snow, planted like bulbs to wait for spring. They stay there day after day. No one comes to take them away.
The book was honest and tough - it is telling a story of what must have been an unbelievably hard time to live through and survive and I appreciated that the author did not try to sugar coat the story in anyway - I felt so connected to Anna and I was hanging in there with her until the very end. I have now started The Betrayal - despite the tragedy and darkness these are such compelling books to read.
Posted by Karen at 4:31 AM

Thanks for this review, I didn't realise it was a prequel, I thought it was a sequel so I can now go ahead and read it before The Betrayal. Really interested, I find Leningrad and the siege really interesting. Thanks Karen!

This sounds fantastic -- I enjoy this time period as well and I love to take a glimpse into the lives of people during that time and during this siege as well -- sounds like a brilliant find, and I must make my way over to the Man Booker list and start checking some off the list!

It is great to know that you enjoyed this as much as I did. I'm really hoping that The Betrayal is just as good :-)

I am attempting to read the entire longlist this year (although perhaps not by September 7 when the shortlist is announced), and I picked up The Siege to read first too. I wanted something lighter after Andrea Levy's superb novel The Long Song, but after my present diversion, I'm jumping into The Siege. I'm so glad you loved it, and I hope I like it (and The Betrayal) as much as you did

I think I am going to have to reread this book. I read it a few years ago now and wasn't all that enthused about it, mainly because I had just recently read one of my favourite books ever with a similar setting.

After reading Jackie's review, and now yours, maybe I should give it another shot. I do intend to read The Betrayal at some point too.

I think I am going to have to reread this book. I read it a few years ago now and wasn't all that enthused about it, mainly because I had just recently read one of my favourite books ever with a similar setting.

After reading Jackie's review, and now yours, maybe I should give it another shot. I do intend to read The Betrayal at some point too.

This sounds amazing - brilliant review! I love books set in Russia - it's such a beautiful and culturally rich country to be immersed in. I will read this, one day!

I skipped to your concluding paragraph, Karen, as I plan on reading this shortly! Verity is kindly loaning me her copy this weekend and I've been sent a copy for review of The Betrayal so looking forward to both.

I got interested on the story and it made my life's view change. I appreciate the effort you gave one this one! Thanks for inspiring people like me!

Karen, you write inspiring reviews and I love the way you can help us see what's in a book. I dont know if it's because I have a Russian name or if I had a past life in Russia, but I find the imagery of bleak cold Russia to be alluring. Love the cover of this book, and the story sounds very inticing. Is it a library book?

Hi Elise - Yes, read it it now!! Can't wait to hear what you think.

Hi Coffee - This is a wonderful example of a novel representing what personal experiences may have been like during this time I think.

Hi Jackie - Me too! Although I have just started it and am not finding it quite as captivating as yet. Hopefully that will change.

Hi Marg - I think this would be a book that you would definitely need to be in the right "headspace" to enjoy. I can imagine if I had read it at another time I might not have been as in to it as I was.

Hi Rachel - my interest in Russia is definitely growing thanks to books like this one.

Hi Claire - I'm really looking forward to hearing what you think about this one. I am pretty sure you will enjoy it...

Hi T - This was a library book - I haven't been able to find it in any shops in our area as yet. I think you would get a lot out of this one.

Great review. Makes me want to read this one although I never heard of it or the author before.

Hi Sabrina - Glad my review has got you interested in this one.

Wow. This one sounds amazing on many levels.