A Weekend With Books, Chocolate and Neil Gaiman

It was my partner's Birthday over the past weekend and I had arranged a few things to spoil him on the day - which luckily for me meant I got to tag along and join in all the fun!
We spent the weekend in Sydney which of course meant a trip to some of our favourite book shops and all of the inevitable purchases that go along with that (more about those in another post). But the highlight of the weekend was a night at the Sydney Opera House Concert Hall to hear Neil Gaiman read aloud his latest short story, The Truth is a Cave in the Black Mountains , which has just been released in a book Gaiman has co-edited simply titled, Stories. 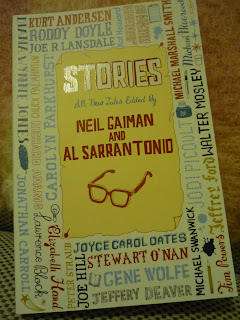 Gaiman was appearing at the Opera House as part of the Graphic Festival. Gaiman's performance was accompanied by illustrations by Eddie Campbell (which appeared on a huge screen behind where Gaiman was standing to read) and original, live music performed by the FourPlay string quartet who played alongside Gaiman and certainly helped to set the scene.
The story itself was simple and yet haunting and memorable - and Gaiman's reading of it was prefectly timed and pitched. A wonderful night which was followed with views like this when we came out of the theatre: 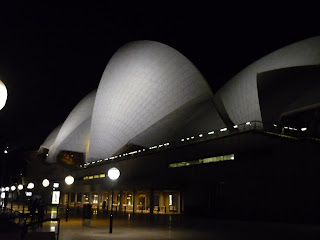 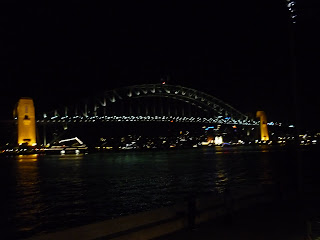 We topped the weekend off with a visit to the Lindt Cafe in Martin Place - so delicious! 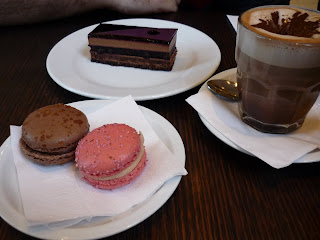 Sounds like a perfect weekend to me! And I love Lindt chocolate.

BTW I wanted to let youknow that I received your gift. It's a very beautiful little notebook. Thanks again.

Ooh, what a great way to celebrate!

Oh, how amazing!! The title of your post drew me in right away (books and chocolate, of course) -- then everything else seemed even more fun!! What a great weekend!!

Sounds like an amazing weekend. I am especially looking forward to what your favourite book shops in Sydney are, especially as someone who has lived in Sydney my entire life.

I worked at the Sydney Opera House for 3 years selling tickets to the performances and sadly that means that I look at venue a little differently to a lot of people (its just associated with work in my mind and I am always thinking about the tiketing and backstage issues when I am watching a show). But it was a nice reminder that there are really good things on at the Opera House and I should pay it a little more attention than I do.

I've been to two Neil Gaiman events in London and he is such a nuanced reader and highly entertaining.

Such a lovely way to celebrate your partner's birthday.

Hi Sabrina - I'm so glad your gist arrived safely and that you enjoy it!

Hi Verity - It was a great weekend - and great timing to be actually happening on my partner's Birthday!

Hi Coffee - My two very favourite things (after my partner of course!).


Hi Sheila - it is most definitely drool worthy!!

Hi Becky - you have given me an idea for another post - my favourite book shops in Sydney. I fear that we only go to the major ones as we are not locals and don't know all of the secret locations so maybe the post will help me find other ones to visit on our next trip.
I can understand what you are saying about the Opera House as a place of work - I used to have to travel all over NSW for work and there are some beautiful holiday destinations I just can't visit now because they will always be associated with work for me. It's such a shame!

Hi Claire - I'm having a bit of a macaron thing at the moment!!

Looks like a wonderful weekend! Your photos are great -- especially love the final shot with the dessert. My boyfriend and I made macarons a few months back and were so impressed with ourselves -- must try them again soon!

I was lucky enough to see Gaiman speak last year...he has a beautiful voice and is a fabulous speaker. I'm glad you got to see him!

Hi Meg - I have a macaron recipe book that I have been eager to try out but I'm not sure my cooking skills are up to it!

Hi Softdrink - We were super impressed that he had come all the way to Australia!

That books looks wonderful.. I shall have to add it to the wish list.. and enjoy your trip to Melbourne!