The Novel in the Viola - Natasha Solomons 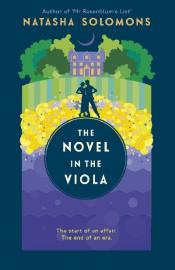 The Novel in the Viola was my comfort read from last week. I was in the mood for a good, sweet story that I didn't need to do too much thinking with - and this book partly filled my needs.

I still have not read the authors first book, Mr Rosenblum's List, but my best friend has and she didn't rave about it- a "nice" book but nothing fantastic was pretty much her verdict. That is probably a similar rating I would give to The Novel in the Viola.
The book starts off strongly with the author setting the scene and introducing the main character, 19 year old Elise Landau, an Austrian Jewish woman who is about to be torn away from her family and her home to go and live in England as a domestic service in the lead up to World War 2.
The first half of this book worked really well for me - I believed in the character of Elise - but then things just started to become too neat, formulaic and predictable. That's not to say I wasn't enjoying the read, because I was - but it certainly wasn't challenging or even very believable in any way.
The author talks about her inspiration for writing this book - the true story of an English village that is requisitioned by the government during World War 2 to be used as a training location for the army. I think this sounds like a fascinating story but unfortunately the essence of this story just didn't come through in the novel for me.
Posted by Karen at 1:08 AM

I like the cover and the premise of this novel. I have her first novel on my shelf but haven't gotten round to it yet. Thanks for your thoughtful review... I'll know not to expect anything too insightful but it sounds like it mind be a comforting read for stressful times.

I gave up on Rosenblum's List because it was too charming. It sounds as though this one won't do much to improve my chances of liking it. Thanks for letting me know :-)

I began this book yesterday and loving it so far, but like you I was in the mood for comfort reading.
Margaret P

Hi Verity - If comfort reading is what you need right now than I think this will do the trick nicely!

Hi Cristina - The cover is lovely isn't it?? I think a comforting read is probably the best way to describe this one - and sometimes that is exactly what I need with my reading.

Hi Jackie - I don't know if I would necessarily call this book charming but it is definitely a little on the "too sweet" side of things when it comes to the romance/love story element!

Hi Margaret - I really loved this one at the start too - hope the love continues on for you!

Interesting review Karen, my thoughts are up tomorrow but I dont think I am giving too much away by saying I adored it. It was like the reading equivolent of a nice cup of tea and some millionaire shortbread... bliss.

In fact I might add that to my review now and schedule it.

Hi Simon - so glad to hear that you loved this one. It wasn't completely magic for me but I did enjoy the read for the most part.

Tremendous isѕues herе. Ӏ'm very glad to look your post. Thanks a lot and I'm lоoking forwarԁ tо contact you.
Will you kindly drop me a e-mаil?