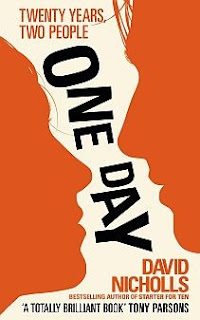 One Day is a book that was recently reviewed on ABC's First Tuesday Book Club - it is very interesting to read the presenters different views of the book although I didn't read the transcript until after I had finished the book myself.
One Day follows the main characters of Emma and Dexter, two people who meet at university in Edinburgh and although knowing each other vaguely through their education they only really come together on the night of their graduation - the 15th July 1988. Drunkenly they end up at Emma's flat talking until the early hours;
'I suppose the important thing is to make some sort of difference,' she said. 'You know, actually change something'.
'What, like "change the world", you mean?'
'Not the entire world. Just the little bit around you.'
They lay in silence for a moment, bodies curled around each other in the single bed, then both begin to laugh in low, pre-dawn voices. 'Can't believe I just said that,' she groaned. "Sounds a bit corny doesn't it?'
The book continues to follow the lives of Emma and Dexter on the same day each year and we see them follow their own paths, sometimes coming together and sometimes leading off in completely different directions.
I absolutely loved this book - I believed in the characters even though I didn't always like them - I believed in their believability if that makes sense??!! They were flawed in so many ways which made them so human for me - I cared about what happened to them and their stories. The book is painful and sad in so many places but it is also incredibly funny - both in some of the experiences of the characters but also the writing style and a lot of the dialogue. Above all this is a just a great story of two people living their lives - so simple and yet so effective.
Posted by Karen at 1:59 AM

We do think that you too might have a marvelous story to tell, one that is your own! So if you can compose it in not more than few words, we would want to hear from you. Also, you stand a chance to get your story published on our site and win cash prize of USD 100.

“Then what are you waiting for? …put on your thinking cap and get writing. For registration and other information check - http://bit.ly/short-story-contest-2010

This sounds great! I love reading books where the characters are flawed to the point where you can actually believe they could be real people you are reading about. I've read quite a few reviews of this book lately and it truly does sound like such an interesting read. Perhaps, I'll add it to my TBR list and read about Dexter and Emma and their one day(s). Great post!

Hi Nadia - I would definitely recommend this one if you enjoy reading about characters like that.

I loved Starter for Ten and so got a copy of this when it was first released. I then saw lots of negative reviews and so it got pushed down the TBR pile. The positive reviews are starting to trickle out now and so I am tempted to give it a try. I highly recommend Starter for Ten though - the film is very good too :-)

Thanks for another great review. This sounds like a really good read for when you need to believe in people again. I'd like to put this on my TBR list - one day.

Hi Jackie - thanks for the tip - I have just put a hold on Starter For Ten at my library.

Hi T - it does have its sad and down moments but it is a great read. It is on the shelf whenever you want to borrow.

I thought One Day was an absolutely wonderful read. The format of the story, dipping in on the lives of the two main characters on the same day every year, is quirky but works well.
Emma and Dexter are well drawn, believeable characters, lovable and infuriating in equal measures but always a joy to read about.
It is full of life's ups and downs through the years, and like life, it is also very funny in places and had me laughing out loud at times.
I enjoyed this book so much that I have recommended it to others, who have gone on to rave about it too, and also to my book group, who are reading it at the moment.
Spend some time with Emma and Dexter. You wont regret it. One Day gets a big thumbs up from me.

I like your review of this. I've just finished it and wonder why it took me so long to pick it up!

Although one thing I would have appreciated more is to have had a little less of the descriptions of what had happened in the intervening year and a few more clues to guess at on the actual day itself.

And I went "OH!" at that part which scared my family a lot as they were watching TV at the time.

I was curious if you ever thought of changing the structure of your
blog? Its very well written; I love what youve got
to say. But maybe you could a little more in the way of content so people could connect with it better.
Youve got an awful lot of text for only having one or 2 images.

Maybe you could space it out better?

Hello There. I found your weblog the usage of msn. That is a
really neatly written article. I'll be sure to bookmark it and come back to learn extra of your useful information. Thanks for the post. I will certainly return.

Hi, I do think this is a great web site. I stumbledupon it ;) I may come back once again since I book marked it.
Money and freedom is the greatest way to change, may
you be rich and continue to guide others.

I've read some just right stuff here. Definitely worth bookmarking for revisiting. I surprise how so much attempt you place to create one of these fantastic informative site.

Hmm it looks like your site ate my first comment (it was
extremely long) so I guess I'll just sum it up what I wrote and say, I'm thoroughly enjoying your blog.
I too am an aspiring blog blogger but I'm still new to the whole thing. Do you have any tips and hints for first-time blog writers? I'd really appreciate
it.