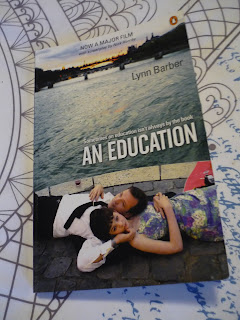 I have wanted to see the movie version of An Education ever since I read about it and saw a preview - the glamorous life of a teenage London girl in the 1960's seeking to escape her working/middle class upbringing through an affair with a much older and more experienced man - sounds just like the dreams I had as a teenager growing up in rural Australia in the 1990's!
But before seeing the movie (which is now out on DVD in Australia) I did want to read the autobiography/memoir it is based on by English journalist, Lynn Barber.
My assumption is that the movie version focuses only on chapter two of the book where Barber re-tells the story of her affair/relationship/dalliance with a much older man when she is a 16 year old school girl in London. The book describes Barber's parents reactions to the relationship - surprisingly accepting - and her own doubts about the man who turns out to have one or two significant secrets. While I was initially disappointed to find that the book didn't focus on this period in Barber's life for longer - my reflective teenage self would have liked to hear more descriptions and tales from the weekend jaunts to Paris and Bruges - my disappointment was only short lived as I realised that this section of her life was only one interesting instance - many more followed in her life as an Oxford student and journalist.
I especially like the sections where Barber reflects on her work as a newspaper journalist where she discovered her passion for interviewing - a skill she clearly mastered if her several British Press Awards are anything to go by. My father is a journalist and I have always loved being a part of that world of newspaper production so this part of the book did bring back many fond memories for me.
This was an interesting and moving read for me - Barber is extremely open and honest in her writing and her reflections of her life - I really felt as though I was being let into her personal diaries - I only wished she had kept on writing.
Posted by Karen at 1:13 AM

I have seen this movie, and loved it. I haven't read the book, but I think that the movie is a masterpiece and strongly encourage you to see it!

I'm really looking forward to seeing this film, too! Though I haven't read the book, but I've heard such good things about the movie. It's at the top of our Netflix queue right now, so hopefully we'll be getting it soon!

The book itself sounds really interesting, even if it doesn't focus on the same period that the movie does. Her reflections on writing would probably be something I'd really enjoy, so I think I'm going to try to get a copy of this one!

I haven't seen the film yet but I definitely want to read the book before I do. I didn't realise that the book is about more than her relationship. Sounds interesting!

I have to agree with Elise - I saw the DVD on the weekend and while I haven't read the book, I thought the movie was subtle and stylish and just all round lovely. Carey is a petite little goddess!

Didn't realize that there was a book. The movie is on my Netflix list so I'll be watching it soon--sounds like a very interesting book.

My friend and I loved this film and I've heard about the book. Glad it was so good!

I have not yet seen the film - as I am determined to read the book first. thank you indeed for sharing this very interesting and clearsighted review.

I saw the author being interviewed recently and she seemed very angry at her parents for the whole thing really which interested me I have to say.

I want to see this film, too. I'd never really thought about reading the book as the movie had received so much critical acclaim on its own, but now you have my interest piqued and perhaps I'll see if my library has a copy. Cheers!

An Education was my favourite film of last year - such a stunning film. I've not read the book yet, but it is on my wish list.

I didn't know it was based on such a small part, but really the moral of the film is it was just one affair that didn't need to wreck her life so I suppose it makes sense.

Hi Elise - Thanks for the encouragement!

Hi Steph - Look forward to hearing what you think about the movie - it definitely sounds like a winner.

Hi Bloomsbury Bell - I think she would be a wonderful person to go and have a drink with - so many amazing stories to tell.

Hi Aimee - I'm a big fan of Carey too and am really looking forward to seeing her in this one.

Hi Jane - look forward to hearing what you think about the movie.

Hi Tara - I'm struggling to find anyone who didn't enjoy this movie - I can't wait to see it for myself!

Hi Hannah - I hope you enjoy the book soon and then get to move on to the movie.

Hi Nadia - it sounds like the book and movie would compliment each other nicely.

Hi A Bookish Space - I'm sure I will love the movie when I finally get myself around to seeing it too.

Hi Nerds - sounds like that was the approach that was taken.

The movie is wonderful, it really is. It's terribly evocative of the time, and the characters are nuanced and believable. A DEFINITE recommendation.

Hi Lulu - I HAVE to watch this movie this weekend!

Can't wait to see it too!
Looking good!

I say,
The emphasis of a barber school's education is to teach the essentials of providing hair and skin services for men. They often learn to perform razor styling, hair cutting and coloring, blow drying, foam shaves, steam facials, and facial massages.
Using a good hair salon is key to great hair care. But how do you select the right hair salon from the many choices available?
You can do to guarantee that you always receive the best hair cuts, latest professional techniques and stellar service is to choose the right hair salon. Granted, that is easier said than done. With hair salons on practically every street corner, narrowing down your options to find the right salon can be confusing.
Specialty Hair Cuts Baltimore