The Sense of an Ending - Julian Barnes 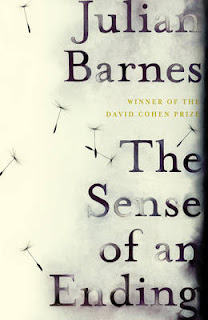 The Sense of an Ending (can I just say how much I love this title!!) is another of my recent reads that has been long listed for the 2011 Man Booker Prize.
The book is told from the perspective of Tony Webster who as a man aged in his 60's is now looking back over his life, friendships and relationships - in particular a friendship he formed in high school with Adrian and his first serious relationship with a girl, Veronica, whom he meets and dates while in college.
This is quite a short novel (150 pages) and it is one of those books that you just want to devour in one sitting.
From the very beginning there is a sense of a mystery and tension building and even though as the reader you are completely in the hands of the narrator and how he chooses to tell his story he is constantly letting you know that he may not be able to be trusted:

If I can't be sure of the actual events any more, I can at least be true to the impressions those facts left. That's the best I can manage.
﻿As the reader I felt I was reminiscing along with Tony - as he is going back through his memories I had a small sense of feeling as though I could have been there too - I think this is the skill of the author in constructing a story that moves and grows through the reading of it. The concept of time and how it is used, how it is remembered and how it moves is a big theme of this novel. Tony reflects on this quite a lot, one of my favourite paragraphs is this:
But time...how time first grounds us and then confounds us. We thought we were being mature when we were only being safe. We imagined we were being responsible but were only being cowardly. What we called realism turned out to be a way of avoiding things rather than facing them. Time... give us enough time and our best-supported decisions will seem wobbly, our certainties whimsical.
The ending of Tony's story is what the book is building to - and I have to say I did not see it coming, I was too caught up in the narrative itself. When I had finished the book I was in shock - I couldn't believe such a small book where seemingly not a lot of action took place could have such an impact on me!
Posted by Karen at 3:32 AM

This is one of those books that you just can't stop thinking about. I thought about it for days analyzed it to death and discussed it with other bloggers. See my review here.
While I thought it wasn't a great book and somewhat unsatisfying, I am glad I read it and I do feel it would make a great book club choice as it will definitely provoke a lot of discussion.

This sounds marvelous! Barnes is one of those authors I want to start soon -- I've always heard great things about his books.

Julian Barnes is one of my favourite authors and this sounds wonderful. I look forward to reading it - very soon.

I was just posting on someones elses blog that I have been terriblet his year and not read any of the man booker books at all. This one sounds good and Ill make sure i get a chance to read it. I love that such a short book can be so emotive.

I cannot wait to read this one! It doesn't come out in the US until January, and I couldn't quite bring myself to spring $30 to ship it in from the UK. I'm glad you loved it, and I hope I do too!

Hi Mrs B - thanks for the link to your review - it definitely is a thinker this one!

Hi Audra - I have always wanted to read Barnes' work too - I'm glad I have finally jumped in!

Hi Joan - It sounds like this is an author who is a favourite with many.

Hi Becky - I think the fact that its length is so short adds to its effect and impact. Barnes doesn't seem to waffle on - he gets to the point and makes it.

Hi nomadreader - I am really surprised to know that this book is available in Australia before the US!

I love that title, too! In fact, because of it I want to read the book. :D

It seems like a popular book for us reviewers! Here is my own review as well.

You actually make it seem so easy with your presentation but
I find this topic to be actually something that I think I would never understand.
It seems too complicated and very broad for me.
I'm looking forward for your next post, I will try to get the hang of it!
My web blog :: follow that shell gameplay

The story is not so great. But, the way it is told is brilliant. It is full of surprises and a little suspense, but at the end, the story does not appear worth of remembering. It finely narrates some events that started some half a century ago and enter in the present. The journey of a man from the childhood in the fifties/sixties to getting aged in the present world has been well-depicted (Although the story has a jump in time for about 30/40 years).
There is a reality unknown to the narrator. The unwrapping of that reality is done fantastically. Besides, the issues raised in different contexts are extra-ordinary, unconventional. Everyday-things appear in new colors. So, it is an experience reading this novel.
I will recommend this work to all those in search of a different taste in reading, but not to those who are in search of a new story. At the end, I felt that I did not read the whole novel to reach at this event which was to me quite boring and unworthy of my labor reading it. Although, I was entertained by how the whole story was told.

Spot on with this write-up, I actually believe this web site needs far more attention.
I'll probably be returning to read through more, thanks for the advice!

Feel free to surf to my blog - wiki.astrolabium.pl

Saved as a favorite, I really like your blog!