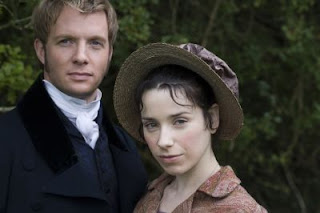 As my fifth item (only one to go!) for the Everything Austen Challenge I chose to re-watch one of my favourite movie adaptations of Austen's novel Persuasion (my absolute favourite Austen novel). The version is the 2007 ITV production starring Sally Hawkins as Anne Elliot and Rupert Penry -Jones as Captain Frederick Wentworth (how handsome is this man??!!).
Apart from liking this movie in its own right it also has a special connection for me as when we were in Bath in 2007 I was able to see an exhibition of costumes and other items from the movie at The Jane Austen Centre.
I agree with some other reviewers in various locations around the web that this movie is not without its flaws - it certainly strays from Austen's original novel in many ways but even though this is my favourite book of hers I really don't have a problem with this movie changing some things around a little. I think the movie remains true to the essence of the story and the relationship of Anne and Captain Wentworth. I think Sally Hawkins is a delightful Anne - even if she does sob and gasp a little too much for my liking in places! She is delicate and strong at the same time (I particularly like the scene in Bath towards the end when she stands up to her snobby father!)and she captures and portrays the history of her relationship with Captain Wentworth in her mannerisms and words perfectly for me. 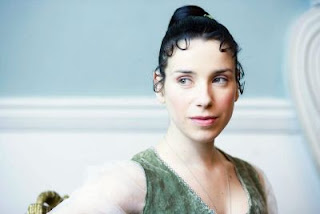 This is the only Austen novel that I haven't read but I do have a copy, your review has made me get it off the shelf and add to 2010's reading pile!

Many people list this as their favourite Austen novel, but I have to admit I've never read it! Part of me is holding back so that I always have some unread Austen to look forward to, but I know I'll need to read it sooner or later!

Also, another reason why I haven't read this one is because I recall watching a film adaptation of the novel while younger that left me completely cold. It just gave me no interest in reading the original material, but knowing what I do now about Austen, I must assume the version I watched was just very badly done!

Yay I love this one, it's the only one of this batch of ITV adaptations that did anything for me. Sigh Rupert is too lovely.

I know this is the most recent version of Persuasion, but the 1995 version is sublime! The looks, the romance, ahhh. Check it out if you get a chance.

Hi Dot - I really hope you enjoy it when you do read it!

Hi Steph - It must feel so wonderful to have an Austen novel yet to read! Persuasion was the last Austen I read too and it instantly became my favourite. It does have a very different tone to her other books I think - much more mature in many ways for me which I think is one of the reasons I connected with it as I really started enjoying Austen when I was older and had finished studying her books at school and uni.

Hi Jodie - I did like some of the other ITV versions but this one was definitely my favourite - Rupert may have had something to do with that!

Hi Tara - I will definitely try and check out the 1995 version - thanks for mentioning it.

I have not seen this version of Persuasion. I may have to check it out because that Wentworth is a hotty!

Hi Serena - he is definitely worth checking out (the movie's pretty good too!).

I've neither read this one or seen the movie. Think I'll add this version to my Netflix queue...