Gone With The Wind Read-along - Week 1 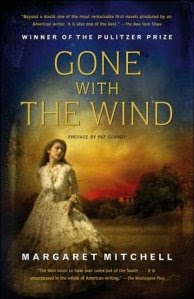 I was most excited to join in the Gone With The Wind Read-along being hosted by Matt. Gone With The Wind is one of the books I have chosen to read for The Chunkster Challenge so this was the perfect opportunity to get it read and have some discussion along the way.
I was a little worried about starting such a large book when I have so many other books on my reading horizon at the moment but I didn't need to worry - once I started to read GWTW I was hooked and have been immersed in it ever since.
I have read the book before - when I was about 14 I was introduced to the movie and fell in love with Scarlett straight away. I then sought out the book and fell in love even more. So, my reading of the book may not be that un-biased (if this is even a word!)but I am finding that reading it again over 15 years later is bringing up different interpretations for me - and even more enjoyment I think.
The read-along timetable is listed on Matt's website - for this first week we read up to the end of chapter 9.
The book starts with a glorious description of the Southern Georgian plantation of Tara, Scarlett's family home and of the character of Scarlett herself - both the physical and psychological character traits are clearly described:
But it was an arresting face, pointed of chin, square of jaw. Her eyes were pale green without a touch of hazel, starred with bristly black lashes and slightly tilted at the ends. Above them, her thick black brows slanted upward, cutting a startling oblique line in her magnolia-white skin...

The green eyes in the carefully sweet face were turbulent, wilful, lusty with life, distinctly at variance with her decorous demeanour. Her manners had been imposed upon her by her mother's gentle admonitions and the sterner discipline of her mammy; her eyes were her own

I can see why I was so drawn to those descriptions and the character of Scarlett as a 14 year old beginning to try and assert her independence in the world - and nothing has changed for me as a 34 year old woman - I can still connect with this character who is miles away from me in context, location and times.
For me (and I am supposing for Margaret Mitchell as well) Scarlett is the heart of GWTW - it is what connects me to the story of the Civil War and the political and social situation of the times. When we first meet Scarlett she is flirting with two local boys whilst at the same time dreaming of her believed true love, Ashley Wilkes. The first part of the book concentrates on the southern plantation life - descriptions that help you seep into the world in which the book is set and let you see exactly what these people believe they are fighting for when they embark into war.
Through this part of the reading I have been drawn to seeing this book, and in particular the character of Scarlett, as a feminist portrayal of women of this time. I'm not sure that this is ever what the author intended but I feel that the situation of women and what was expected of them can be seen through this lens - I'm finding this an interesting by-product of my reading of the book this time.
I have left Scarlett in Atlanta - enjoying the ruination of her reputation - and I'm looking forward to getting back there soon.
Posted by Karen at 3:00 PM

I've never read Gone With the Wind (or seen the movie!). Though I do seem to recall reading some kind of 'sequel' aimed at teenagers when I was in high school.

I'm looking forward to seeing what you think once you've finished it!

Hi Megan - I am really loving the reading this time around so I'm looking forward to getting to the end. There is a sequel called "Scarlett" I think - which I also read back in high school but I can't seem to find a copy anywhere at the moment.

I have yet to read this classic.

You have been given an award over on my blog:
http://marireads.blogspot.com/2009/03/what-week-sunday-salon.html

Hi Karen,
I love the blurbs you pulled out - especially the one that ends with "her eyes were her own." It's one I remember from reading it many years ago. I really enjoy seeing other reader's comments as they read this book. It's one of the historical fiction novel that got me interested in the Civil War and led to the writing of my own novel (Shades of Gray). http://www.jessicajamesbooks.com

Hi Jessica - thanks for the info about your book.

I agree about the feminist portrayal of the time. In fact, that's how I felt about it all along while reading but wasn't able to pinpoint nor articulate exactly. Your post sent a *ding* to my head. :D

Happy reading along with you..

Hi Claire - it is great to be able to hear other people's perceptions of the book as we are reading along together, I am really getting a lot out of that too.

that's great idea--i actually just read GWTW for the first time a few months back. i had never seen the movie either! i don't know how i lived 34 years without reading this book--i couldn't put it down.

Hi booklineandsinker - have you seen the movie now?? It's different from the book in lots of ways but I think it still stays true to the spirit of Scarlett.

I lament that women had very little choice over their life at that time. For Scarlett, she is very well aware that there will be no way she can become what Melanie is to Ashley. So I disapprove her neglecting a mother's responsibility.