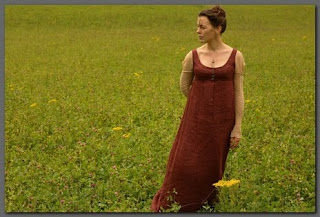 The BBC production of Miss Austen Regrets which showed last night in Australia was my third selection for the Everything Austen Challenge.
This movie focuses on the latter parts of Jane Austen's life - she is approaching the age of 40, is living with her elderly mother and adored sister, Cassandra and is in the process of finishing Emma and searching for a publisher for it when the movie begins. Jane's 20 year old niece, Fanny, is looking for the perfect husband and so enlists the support and assistance of "Aunt Jane" in her endeavours. As Jane and Fanny go over prospective husbands for the younger woman Jane reminisces on the past loves, flirtations and proposals of her own life and meets one or two possible suitors in the present time.
The script writer has said that she based her story on the surviving letters Jane sent to Cassandra and Fanny during this period and I thought she did a wonderful job of interpreting these letters into fiction.
The actress who played Jane, Olivia Williams (where have I seen her before??), was beautiful - she created an edgy, funny, moody and spirited Jane who I really enjoyed watching. I found a lot of her mannerisms and language to probably be a bit too modern for the moment she is meant to be living in but I still enjoyed watching.
The regrets of the title focus on Jane's thoughts about never having married - although I feel she may have had regrets about this at times (isn't it only human to have regrets about our choices in life at times?) I truly feel that her books and writing were her family and her passion and her true regret may only have really lay in having missed an opportunity to make her beloved family more comfortable which may have happened if she had chosen to marry. I thought the movie really captured the difficult situation Jane was forced into because of the time period in which she lived - her only "real" choice was to marry and become a wife and mother - a way of life that would have most probably ended her writing career which she so loved.
I spent a totally enjoyable hour and a half watching this show! Beautiful sets, costumes and photography added to the magic of the script for me. Do I think this is actually how things happened? No, but I enjoyed thinking it might have...
I now have 3 more selections left to read/watch in this challenge - do any of you have any selections that you think I should definitely add to my list?
Posted by Karen at 1:49 AM

Ooh, Olivia Williams is Adele from Dollhouse (Joss Whedon show which may not be what you know her from).

Have you seen Lost in Austen yet? I would definitely recommend that. I think I'll try to watch this for the Everything Austen challenge; I'm running way behind.

I agree with Paperback Reader - Lost in Austen is such a great show and definitely a must-see for any Austen fan. As far as your review of this movie, its sounds so good! I must definitely find a way to watch it. Cheers!

This one is on our Netflix queue, and I'm so glad to hear you enjoyed it. A few years back we watched the horrific feature film, "Becoming Jane", which stars Anne Hathaway and James McAvoy, and is a fictional retelling of Jane Austen's life. I was so distraught while watching it since the movie creates this torrid romance between Jane and some guy that never actually happened, and it just really REALLY bothered me... Since this is at least based in part on letters, I'm hoping that I'll like it a lot more!

this sounds like a nice one. gonna add it to my everything austen.

I recognized Olivia Williams as Jane Fairfax in the Kate Beckinsale Emma.

Great review of a great little movie--I also enjoyed it immensely and thought it was very true to my image of Austen, who she was and how she was with her family.

I also agree that she had limited choices but knew she had talent. She valued herself in some ways more than her family valued her, if that makes sense.

What should you read/watch next? I'm going to be bold and recommend my own book of Austen-inspired short stories, Intimations of Austen. I'll be conducting a giveaway of it later this week on my blog if you want a chance to win it :)

I'm usually not a fan of Austen spin offs, Lost in Austen for example left me cold (P & P without Lizzie!!!) I was pleasantly suprised by this though, I thought the script, acting, scenery and costumes were all great.

I'm glad to hear you enjoyed this film. It's on my list for the Everything Austen challenge too and I just need to find a moment to watch it!

Hi Claire - I know! I googled her after I wrote the post because it was just killing me! She was also in an early episode of "Friends" (my fave tv show) so I'm sure I remember her from there too.
I have seen Lost in Austen - really loved it too - might even watch it again...

Hi Nadia - I hope you manage to watch this one - and that you enjoy it as much as Lost in Austen.

Hi Steph - I don't think this show overplays the romance side of things as much as Becoming Jane. I actually really liked BJ - I just had to pretend it had no connection to the real Jane Austen at all!

Hi Jane - I actually have a copy of your book on my list for the challenge!

Hi adevotedreader - the whole package was great in this one wasn't it? Sorry you didn't enjoy Lost in Austen - I thought it was a lot of fun - a different take on the P&P world!

Hi Iliana - really looking forward to hearing what you think of this one.

I was able to find good advice from your content.