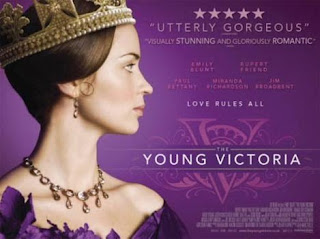 The Young Victoria was a DVD that I bought while we were in the UK and I was very excited to find it as it only just come out at the cinemas at the time we left Australia and I hadn't been able to get to see it before we left. I find with DVD's (unlike books!) I seem to wait ages after I have purchased them to actually sit down and watch them - so it was only last night that I finally broke open the packaging on this one.
The story of Queen Victoria is not one I am overly familiar with beyond the most well known facts but I have always been interested in the relationship she had with Prince Albert and the way she grieved his loss after his early death at the age of 42. I became more interested when we visited Muckross House in Killarney in Ireland on our recent trip - a beautiful house that Queen Victoria and Prince Albert had spent a few nights in not long before his death. 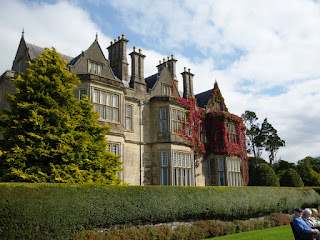 The Young Victoria is a stunning visual movie - gorgeous locations, costumes and people! I felt that Emily Blunt played a vibrant, feisty Victoria and while some of her mannerisms may have come across as quite modern (similar to the response I had to Miss Austen Regrets) who is to say that that is not how she would have responded in certain situations - particularly in regards to her relationship with Albert. 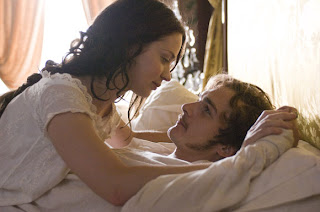 The movie focuses on the period in Victoria's life just before she turns 18 and then afterwards when she becomes Queen. We see her relationship with Albert develop from one of suspicion (this is the man that her manipulative mother wants her to marry after all) to one of respect and love. The movie also covers aspects of the political and social setting at the time which I found gave a good context for the relationship between Victoria and Albert.
With my lack of historical knowledge of this particular person and time in history I am not sure if the movie is accurate in all that it portrays but I know that I enjoyed watching it very much. 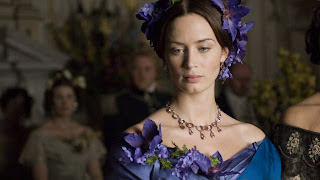 I have now brought out a copy of a book I have had on my shelves for a while and am now inspired to read - Becoming Queen by Kate Williams.
Has anyone else read any other books about Queen Victoria (fiction or non-fiction) that they would recommend?
Posted by Karen at 1:16 PM

I read Victoria Victorious by Jean Plaidy, but I didn't like it very much, and there's not a lot of other books on Vicky Regina.

I liked this movie a lot and I thought it was beautiful. Have you seen Mrs. Brown, with Judi Dench? It's about the Queen's late-life love affair with her gardener, I think.

I cannot think of any books about Queen Victoria at all. If you do get some good suggestions do let us know. I think Novel Insights was looking for some books on her too.

I really enjoyed this movie although it did rather suddenly end. I am hoping the carry on the story.

I haven't heard of this film or read any books about Victoria. I look forward to your review of Becoming Queen - hopefully it will be good and I'll be able to put it on the list.

I've seen Mrs. Brown a long time ago, but don't know much about Queen Victoria. Now that I've almost satisfied my curiosity about Queen Elizabeth, maybe it's time to move on? :) This movie sounds great.

This movies sounds really good. Thanks for the review! I'll definitely be checking it out soon. Cheers!

I'm so excited to see what you think of the Kate Williams book! I read her book on Emma Hamilton and it was just wonderful.

I'm SO glad you enjoyed the movie!

Hi Connie - I think I have seen Mrs Brown a long, long time ago now - can't seem to remember much about it...

Hi savidgereads - I wanted the movie to keep going too!

Hi Jackie - I will be sure to let you know what I think of that one - although not sure when it will get finished - my reading seems to be all over the place at the moment!

Hi tuulenhaiven - I'm interested in Queen Elizabeth I too!

Hi Nadia - I hope you enjoy it when you get to it.

Hi Jodie - thanks for letting me know about that book, I like what I have read so far although there are so many "characters" you have to keep concentrating!

Hi Aimee - I definitely did!

i am so looking forward to watching this in the theatre next month. i don't know much about the her history so it will be new for me and i'll be going in without biases. should be enjoyable based on the trailers i've seen. love the costumes and scenery.

Hi vvb32reads - I really hope you enjoy it when you get to see it - it certainly is a visually beautiful movie.

Young Victoria is on my NetFlix queue for sure! I also enjoyed Mrs. Brown with Judi Dench. Can't recommend any books, though. I did like the Teaching Company's lecture series on Victorian Britain. There were a couple really good lectures on Victoria herself: http://www.teach12.com/ttcx/coursedesclong2.aspx?cid=8490

My library has this series and if yours doesn't, you might be able to get it via interlibrary loan.

I was lucky enough to catch "The Young Victoria" on a plane ride home from England this past May, and I absolutely loved it! I don't think it was ever released in the U.S. -- and definitely not where I live -- so I wasn't sure when I'd ever get to see it. Definitely the perfect way to end my UK trip!

I haven't read any novels based on Queen Victoria, but I'd be interested in them, too!