A Week At The Airport: A Heathrow Diary - Alain De Botton 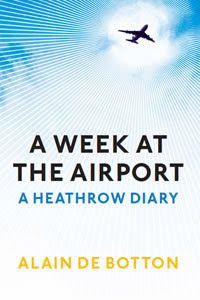 I had heard about A Week At The Airport when we were travelling last September. Philosopher and writer, De Botton has been approached by the owners of Heathrow Airport to spend a week in the airport's new Terminal 5 as its very first "Writer in Residence". I admit that the whole concept sounds like a huge marketing ploy but I was also a little jealous - I would love to get paid to live in and write about an airport!
I have not read any of De Botton's previous and more extensive works so this 107 page book has really only given me a tiny taste of his work and his style. I can't say that A Week At The Airport was everything I was expecting it to be but it was a delightful, reflective and thought provoking read that has just made me want to jump on another plane as soon as possible!
De Botton starts off by declaring himself a lover of travel and the humble airport;
While punctuality lies at the heart of what we typically understand by a good trip, I have often longed for my plane to be delayed - so that I might be forced to spend a bit more time at the airport.
This quote immediately connected me with De Botton - I have also often made this wish!
The book seems to meander along with little structure or focus - and I don't say this in a negative way. De Botton has obviously chosen to write about those specific moments and people that have captured his attention during his week in the airport and yet each of his reflections could easily applied to broader situations - I connected with a lot of what he wrote about from my own experiences of being in airports. I especially liked the section about the emotionality involved in our experiences of meeting our loved ones at airports;
We may spend the better part of our professional lives projecting strength and toughness, but we are all in the end creatures of appalling fragility and vulnerability. Out of the millions of people we live among, most of whom we habitually ignore and are ignored by in turn, there are always a few who hold hostage our capacity for happiness, whom we could recognise by their smell alone and whom we would rather die than be without.
I had thought that this book would contain more in depth information about the structure and world of Heathrow Airport itself but I was not disappointed by what I received instead.
Has anyone read other works by De Botton? Would they recommend them?
Posted by Karen at 3:01 PM

I read his book 'Status Anxiety' a few years ago as it came highly recommended, and I remember really liking it. It had a good, thought provoking focus and his style is enjoyable and compelling. I also liked that he brought in a variety of philosophies and somehow managed to bring them all together and present a cohesive, fun, and insightful read :) And yay for airports :)

I read his book 'Essays on Love' a few years ago and I'm a little hazy on the exact details now but I remember finishing it within a couple of days because it was incredibly addictive and readable. He writes beautifully and he's the kind of author who I feel is actually writing my exact thoughts.

This sounds like so much fun and perfect for those of us who love to travel. I haven't read anything by De Botton but I did pick up a copy of his "Essays on Love" last year, and hopefully I'll make time to read it this year!

It sounds like a very late slight rip off of The Terminal film and am not sure that would work for me. I do very much like the idea of living in an airport for a week, I am a bit of a people watcher.

Hi Stockdove - I think his writing style is so good you could read a book by him on almost any topic and it would be interesting.

Hi fi - I hadn't actually heard of this one before - I will have to look out for it. Any book that captures and then holds your attention is great for me!

Hi Dot - It was interesting - a nice, quick read.

Hi Steph - that's one I'm going to be looking out for this year too now.

Hi Simon - I love people watching too! One of my favourite hobbies!