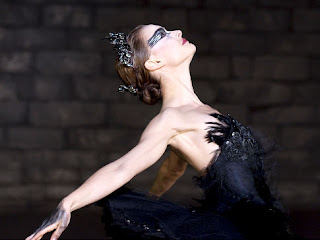 As part of our "holiday at home" my partner and I have been enjoying lovely meals at home and out as well as catching up on our movie watching. Last night it was the turn of Black Swan starring Natalie Portman and Mila Kunis.
One of the many rave reviews for this movie describes it as a "psycho-sexual thriller" and it is certainly that! The word running through my head at the end of the movie was "intense".
The film is set in a New York ballet company and its new season is about to begin with a showing of Swan Lake. The principle role of the Swan Queen has been won by Nina Sayers (played by Natalie Portman) but a new dancer in the company, Lily (played by Mila Kunis) shows promise and Nina becomes convinced that she is trying to wrestle the role from her. The stress of taking on the role and being able to access the darker side of her personality in order to be able to portray the role of the Black Swan convincingly takes its toll on Nina and she begins to sink into a world of paranoia and hallucination - or does she?
This was an amazing, if at times difficult, movie to watch. The costumes, sets, music and dancing were magical (I have gone out and bought the soundtrack to the movie today!) and the performances by the two main female characters were incredible - Natalie Portman in particular deserves the praise and accolades she is receiving for this role.
A movie that will stay with me for a while...
Posted by Karen at 6:56 PM

My mom told me about the scene with her fingers...and that was enough for me.

Intense indeed, though I did enjoy it. I recently heard Natalie Portman say in an interview that she lost 10 pounds training for the film and all I could think was, from where??

I didn't even think of getting the soundtrack - good idea! I loved the movie and thought that Portman did a brilliant job as Nina. It was just such an interesting film that really captivated. So glad you enjoyed it!

I keep thinking the synopsis sounds a lot like All About Eve. An old Betty Davis film. It sounds good though.

Hi Jill - That was a tough scene to watch!!

Hi Coffee - My partner came along with me and he quite enjoyed it (I think the fact that Natalie Portman was involved probably helped!).

Hi antipodeanowl - Intense but enjoyable I agree! I'm not sure where she would have lost that weight from either!!


Hi Nadia - It was definitely captivating!! I haven't played my soundtrack yet - might have to do that today while I do the housework!

Hi Amanda - I have never seen that film but I have heard about it - I might have to track it down...

One for dvd I think , where I can fast forward through the bits that are too hard to watch.

Hi Jodie - that might be a good plan - although I think you will spend quite a bit of time fast forwarding!!

I loved this one too. It's one that has stayed with me!

Hi Carrie - I know exactly what you mean!

And customers, he said, must be able to find and access content that they desire.
However, we can't choose our favorite program and movie when we watch TV. One of the biggest changes is the fact that Apple has removed the permanent storage (hard drive) from the device.

Here is my web-site: apple tv

The question is - which platform provides the best viewing experience.
You can get an excellent picture on your HDTV if you use a cheap progressive-scan DVD player with HD
upconversion. A stable internet connection is needed, may it be
using a cable-powered connection or wifi.

No lender or investor wants to sink their money into a business
with no future. The flexible screen technology that will soon be available to us
will be the tool that finally turns users away from paper based publishing.
If there were dual cameras or a rear facing camera you could center things and get accurate photos.


Feel free to surf to my page; nexus 7

That being said, it can be seen that Apple and Samsung continue to grab
market share from other OEMs. If you wish to answer a quick question, again, use your Smartphone to go online and search for that quick answer.
It can keep you well organized because it serves as a personal computer
with electronic diaries, personal organizers, automatic reminders, and
contact lists.

They must have been forced to face several uncomfortable issues as far as the use of their i - Phone is concerned.
3 inches screen, there is 285 pixel in one inch, it
is also called ppi. 3GHz Nvidia Tegra 3 quad-core processor plus 1GB of RAM.

However, there is high internet access on the phone and there
are all possibilities of a virus attack on the phone.

Both support tethering and have a GPS transceiver with A-GPS.
It runs in very smooth and customized way to keep its users satisfied.