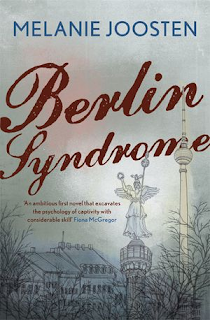 I am always a little wary of books claiming to be "psychological thrillers" - I start them eagerly only to find that they don't really fit my criteria of either psychological or thrilling - they become predictable and boring. I think that is one of the reasons why I am so excited by Melanie Joosten's debut novel, Berlin Syndrome - it claimed to be a psychological thriller and in my reading eyes it definitely was.
The book starts with the meeting of Clare and Andi. Clare is an Australian photographer on a backpacking/work trip through Europe and she is in Berlin when she meets a local man, Andi while waiting to cross a road near Checkpoint Charlie. There is an instant physical attraction between the two and they quickly form a sexual relationship and friendship.
The book alternates between the narration of Clare and Andi and also between the present and the past. The reader slowly learns about the sequence of events that have led to the present time in the story as well as the more recent, and distant past. It sounds like a complex structure but it reads so easily - I never felt lost or confused by where I was in the story. It was also a structure that allowed for tension and drama to build. This was a book I just couldn't put down - I had to keep reading to find out what would eventually happen to these characters. I don't want to say too much more because I think this is one of those books you just have to discover for yourself - and I would definitely recommend that you do. The only flaw I found in this book was perhaps the ending - but maybe that was just because I was enjoying the ride so much I didn't want it to end!
Posted by Karen at 3:49 PM

With havin so much content and articles do you ever run into any issues of plagorism or copyright infringement?
My blog has a lot of completely unique content I've either written myself or outsourced but it seems a lot of it is popping it up all over the internet without my permission. Do you know any techniques to help stop content from being ripped off? I'd truly appreciate it.
My web page :: sports betting sites

Hi there, You have done a great job. I'll definitely digg it and personally suggest to my friends. I'm sure they'll be benefited from this web site.