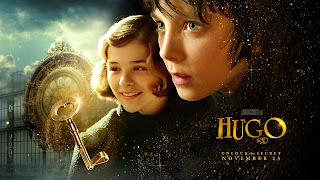 I have not read The Invention of Hugo Cabret but I remember seeing it in bookshops when it was first released and thinking was a clever, gorgeous looking book it was. Now that I have seen the movie I may have to go back and make a purchase I think so that I can experience it all over again..
The Martin Scorsese film has been nominated for a raft of Academy Awards including best picture, best director and best score and after seeing the movie for myself over the weekend I can see why.
The story centres around a boy named Hugo Cabret who is living in the walls of a Paris train station after the death of his family. Hugo survives by stealing bits of food from the shops within the station but his driving force is the repair of an automaton machine that his father discovered before his death and was helping to restore. In order to find the parts to complete the machine Hugo steals from the owner of the small mechanical toy shop in the station and is eventually caught leading to all sorts of ramifications and adventures.
This is a really simplistic telling of the plot which is slow to get going at first (although the opening scenes where the camera sweeps over Paris and into the train station are simply gorgeous) but then erupts with action, romance, friendship, heartbreak and twists and turns. The film is visually stunning - it would be interesting to hear what lovers of the book think of the way in which the scenes have been interpreted - and the musical score adds to the magic of the story and the characters.
Absolutely loved it!
Posted by Karen at 9:50 PM

I've heard similar raves about the scenes of Paris. I'd love to see this one just for that reason. Thanks for the review.. Sometimes I wish they showed movies on our trains - I could enjoy my trip to work with this type of entertainment.

You definitely need to go and get the book! The illustrations are beautiful! It took me so long to get around to reading the book that the movie was gone from the theaters. Boo! I am the type that needs to read the book first.

Hi T - I think you would absolutely love the opening scenes of this movie - and the movie as a whole.

Hi Elisabeth - I am like you normally too - have to read the book before the movie - I think I will just have to make an exception in this case!

I love looking through an article that can make people think.
Also, thanks for allowing me to comment!

Every weekend i used to pay a quick visit this website,
for the reason that i want enjoyment, since this this website conations in fact nice funny data too.

Take a look at my blog :: snoring mask

My brother suggested I may like this web site.
He was totally right. This put up actually made my
day. You can not imagine just how much time I had spent for this information!
Thanks!

Thanks in support of sharing such a pleasant opinion, piece of
writing is nice, thats why i have read it entirely

Stop by my webpage: germany

I am actually grateful to the holder of this web page who has shared this fantastic
piece of writing at at this time.

Here is my weblog :: http://das.deanbassett.net/

I am really thankful to the owner of this web page who has shared this impressive post at here.


Have a look at my web-site - webcam sex

Its like you read my mind! You seem to know so much about this, like
you wrote the book in it or something. I think that you can do with a few pics to drive the message home a bit, but instead of that, this is magnificent blog.
A great read. I will certainly be back.

Good day! Do you use Twitter? I'd like to follow you if that would be okay. I'm absolutely enjoying your blog and look forward to new updates.

This article is actually a good one it assists new net people, who are wishing for blogging.


Here is my weblog :: wiki.webtainment.eu

Hello there, I found your site via Google at the same time as looking for a comparable matter, your web site got here up, it seems great.
I have bookmarked it in my google bookmarks.

Hello there, just turned into alert to your weblog through Google, and found that it's truly informative. I'm
gonna be careful for brussels. I'll be grateful if you happen to continue this in future. A lot of people shall be benefited from your writing. Cheers!

My partner and I absolutely love your blog and find most of your post's to be precisely what I'm looking
for. can you offer guest writers to write content to suit your needs?
I wouldn't mind publishing a post or elaborating on many of the subjects you write in relation to here. Again, awesome blog!

Here is my web blog - www.unovarpgnet.net

Currently it looks like Drupal is the preferred blogging platform out
there right now. (from what I've read) Is that what you're using on your
blog?

Yes! Finally someone writes about morales.

Howdy just wanted to give you a quick heads
up. The words in your content seem to be running off the screen in Internet explorer.
I'm not sure if this is a formatting issue or something to do with web browser compatibility but I figured I'd post to let you know.

The design look great though! Hope you get the issue solved soon.
Thanks

Feel free to surf to my web site :: vakantiehuisje frankrijk