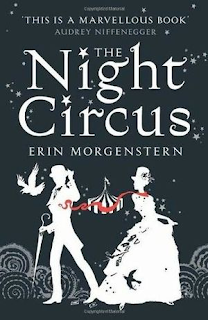 The Night Circus was one of those books I had seen and heard about but stayed away from for so long - I'm not really sure why - I think I thought it might have been a little too "out there" for my reading tastes. How wrong I was! This book is already one of my favourite reads of 2012 and I am sure it will stay at, or near, the top of the list no matter how many books I manage to read this year.
The Night Circus tells the story of a special circus Le Cirque des Rêves (The Circus of Dreams) that travels the globe during the late 1800's opening only during the night hours to captivated crowds. The circus is part traditional circus and part magical realm - the setting of a contest between two novice magicians, Celia and Marco where they attempt to out perform and out maneuver the other in a contest designed to be the death of one of them.
Reading this book reminded me a lot of Jonathan Strange and Mr Norrell - another book that I originally stayed away from but couldn't put down when I did eventually decide to read it. The Night Circus was very similar in its appeal for me - a combination of relationships and settings grounded in reality but also a magical, fantasy element that captured and intrigued me. The book is rich in imagery - I can only imagine that a movie version is already being looked at - and I felt the author did an amazing job in bringing her visionary world to life for the reader. Looking back over the plot carefully after finishing it is easy to see some gaps and inconsistencies but I prefer not to dwell on these - I certainly didn't notice them when I was caught up in the reading and I was completely transported to the world of The Circus of Dreams.
The book was long listed for this years Orange Prize but unfortunately did not make it to the short list - I would like to see books showing this much imagination and story telling ability rewarded much more often.

This was such an impressive debut novel. I loved the different strands of the story and how they converged. Loved the relationships and the language! So clever.

Agree with Marg, impressive first novel and I'm looking forward to the movie adaptation. What was your favorite tent? I think I could spend years in the one with the bottles/memories.

I'm looking forward to reading this! But first, Jonathan Strange, which I'll be dipping into real soon, for the Once Upon a Time challenge!

Hi Marg - It was extremely impressive wasn't it - I was in awe of the imagination used to produce it!

Hi Alex, Oh yes, that one was gorgeous. I was also a little bit mesmerised by the ice tent...

Hi Claire - I so hope you enjoy it as much as I did!

I have it on my shelf but haven't read it for the same reason as you; too much hype! I'm glad to read you mostly enjoyed it, too.

Hi Kay - I say give it a go! Try and ignore the hype though if you can!

It's amazing to pay a quick visit this web page and reading the views of all friends about this paragraph, while I am also zealous of getting know-how.

Thank you for sharing your thoughts. I truly appreciate
your efforts and I am waiting for your next write ups thank you once again.


Stop by my page; www.powersupplywiki.com

Please let me know if you're looking for a writer for your site. You have some really great articles and I think I would be a good asset. If you ever want to take some of the load off, I'd
really like to write some content for your blog in exchange for
a link back to mine. Please shoot me an email if interested.
Regards!

I think the admin of this web page is genuinely working hard in support of his web
site, as here every information is quality based stuff.

Do you have a spam issue on this blog; I also am a blogger, and
I was wondering your situation; many of us have created some nice procedures and we are looking to
exchange solutions with other folks, be sure to shoot
me an email if interested.

Check out my blog :: http://Wiki.mugdiving.mu/Index.php/User:AlexYYLO

If you have come from the West and you are captivated by the Asian beauty, in that case, we make sure that you get the best Call Girls in Mahipalpur to help you taste the Asian flavor in the best way. At Mahipalpur, we make sure that you are getting one heck of an experience with our girls. So, no matter whether it is official meeting or bachelor party, we are there for all your needs. Visit:- Here

Do you need a Call Girls in Gurgaon to give you the real pleasure of your life, well, if you revert in affirmative, in that case, you are at the right place. We are a stupendous track record of providing the best girls that would completely take the evening of yours by storm, so to avail them all you need to do is just call and we will provide the best at the right price. Visit:- Here