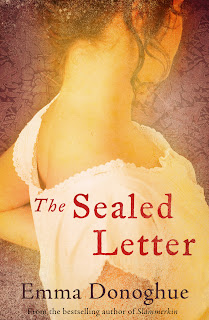 It seems like I was one of the few people who didn't fall heavily for Donoghue's much loved and talked about book, Room - I thought it was clever in so many ways but despite the content it just failed to connect with me for some reason.
My latest Donoghue read is a completely different matter however - The Sealed Letter had me hooked from the start and I can see why it has been long listed for the 2012 Orange Prize.
The Sealed Letter is set in Victorian England and is based on the true story of divorce proceedings between an upper class couple of the time - Henry and Helen Codrington. Divorce cases were still extremely rare in these times (Donoghue writes in her author's note that in Britain between 1670 and 1852 there were fewer than two divorces a year with this rising to several hundred a year after the Matrimonial Causes Act of 1857).
The story is told from the perspectives of the three main characters, Henry and Helen and Helen's close friend, Emily 'Fido' Faithful a young single woman firmly behind the feminist reform cause of the day who runs a successful printing press in London. Fido and Helen come back into contact with one another seemingly by chance when Helen and her family return from Malta where her husband has been stationed for several years with his position in the Navy. Fido quickly discovers that the Helen she thought she knew has developed into a woman in a compromising position - she has a lover whom her husband knows nothing about and she appeals to Fido to support her in what Fido believes to be an attempt to end the illicit affair.
The story covers the legal trial that takes place after Henry Codrington cottons on to what is going on under his nose and petitions for divorce from Helen - drawing Fido in as an unwilling and at times helpless witness. As a legal thriller I found this book to be extremely entertaining but it has so many more levels to it - the unequal relationships that occurred between men and women of the time and the powerless positions women could be placed in if they did not "toe the line" and clearly meet all of societies expectations of them was clearly demonstrated throughout the story. The characters themselves could be frustrating and very unlikeable but that intrigued me - and the fact that the story was based somewhat in fact and meticulous research just added to its authenticity for me - a fantastic read.
Posted by Karen at 1:44 AM

I haven't actually read Room and to be honest I am not sure that I really want to. I did like Slammerkin and I think I would like this one too if I ever got to it.

I liked this too, especially watching Helen and Henry being persuaded to make more and more accusations of each other. The legal sections were fascinating, as you say, Donoghue has clearly done her research!

I'm surprised that this one is not more reviewed, considering how famous Room is.

I think I'm going to make this one my next Orange read. I did adore Room, and I've been eager to explore Donoghue's other work because it is so different.

This does sound good--I've been reading a lot around Victorian times lately, fiction and non-fiction, and women really did have it rough.

Good review--made me want to drop everything and get started on this book!

Hi Marg - I've just picked up Slammerkin from my library - it sounds fantastic!

Hi Sam - I know, you could just feel the tension rising couldn't you - and also see the power of the legal teams!

Hi Alex - I know what you mean - I actually wasn't sure if there were from the same author at first.

Hi nomadreader - this one is definitely very different from Room!

Hi Jane - I love Victorian era books as well which I think is one of the reasons I connected with this one - I hope you enjoy this one as much as I did!

I love Donoghue's historical fiction -- I didn't expect to like Room but did -- so I'm deeply excited to read your review. This sounds like such a good book!

I couldn't bring myself to read Room, given the subject material. This novel sounds like the author's tackling another difficult subject relating to women's experience of the world. While set in a Victorian era, is there that much different these days - especially in what we see in the courts?

Hi Audra - so glad you found Room enjoyable - I always find I am in the minority in this one!

HI T - So true - so many things have not changed in regards to societal values and judgements towards women unfortunately.

Hi Karen! This sounds like it's right up my alley. Room has never interested me but this one definitely does.

Hi Claire - give it a try, I hope you enjoy!

I've been wanting to read this for a while but still haven't got around to it. Historical fiction based on real events and people get my vote! I read Room when it first came out, and although it was readable, I wasn't really that over-awed by it.

Hi A Bookish Space - I totally agree - I'm always on the look out for great historical fiction based on the real.

With havin so much content and articles do you ever run into
any problems of plagorism or copyright violation?
My website has a lot of completely unique content I've either authored myself or outsourced but it seems a lot of it is popping it up all over the internet without my authorization. Do you know any techniques to help protect against content from being ripped off? I'd really appreciate it.
Here is my website ... Work from home jobs

Hi there! I'm at work browsing your blog from my new apple iphone! Just wanted
to say I love reading through your blog and look forward to all your posts!
Carry on the fantastic work!

My webpage - Please visit my site
My webpage :: Go To my website

Thank you from Templepatrick ;)

I'm not sure where you are getting your info, but great topic. I needs to spend some time learning more or understanding more. Thanks for great info I was looking for this info for my mission.

Check out my weblog - victorinox watches

I was wondering if you ever considered changing the layout of your website?
Its very well written; I love what youve got to say.
But maybe you could a little more in the way of content so people could connect with it better.
Youve got an awful lot of text for only having 1 or 2
pictures. Maybe you could space it out better?

Good day very nice blog!! Guy .. Excellent
.. Superb .. I will bookmark your web site and take
the feeds additionally? I'm satisfied to find so many helpful info here within the publish, we want develop extra techniques on this regard, thanks for sharing. . . . . .

I do agree with all of the concepts you've offered to your post. They are very convincing and can certainly work. Nonetheless, the posts are very short for beginners. May just you please prolong them a bit from next time? Thanks for the post.

my webpage watches for sale

Wonderful blog! I found it while browsing on Yahoo News