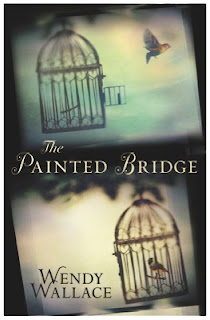 The Painted Bridge was one of those books that spoke to me as soon as I saw it on the shelf - a gorgeous evocative cover, a setting in Victorian England (one of my favourite reading/historical periods) and a topic area covering women's mental health and the treatment of women in asylums.
The book starts by introducing the reader to Lake House - "a private asylum for genteel women of a delicate nature" as the back cover blurb tells us. A resident of the asylum is having her photograph taken as a method of diagnosing and treating her particular  "illness" by a young and experimental doctor, Lucas St Clair. The reader is taken from this scene to one where the main character, Anna Palmer is first bought to the asylum - without her knowledge or consent - by her husband.
The book follows Anna's journey through the various treatment models used by the asylum and it's staff and her determination to prove her sanity and be released. Along the way many other characters are introduced, some in quite a lot of detail, and I felt this was one of the down falls of the book. There were so many different characters and back stories to take into consideration it was hard to know where your focus as a reader should lie.
Anna interacts with the other residents of the asylum and comes to know their stories for being there and she also begins a tentative friendship with the young daughter of the owner of the asylum which leads to one of the main adventure scenes of the book. We are also taken into Anna's childhood (much as a psychiatrist or therapist might take a client) and learn of the important events of her life including the death of her father and her marriage to a man who is not what he first seems.
The book is definitely a page turner - there is plenty to keep a reader interested and occupied but, as I have said above, Anna's story probably could have been a lot tighter without the distractions of so many others competing for the reader's attention.
Posted by Karen at 5:50 PM

I love the cover! It's so striking! Will have to add this to my TBR as it has all the elements I love in a book.

That cover is stunning! Great review.

Hi Audra, I must admit it was the cover that first drew me in on this one too. I find that the cover of a book really influences my decision to read it or not - I know that it sooo superficial!

Hi Dot, thanks so much!

I’m not that much of a internet reader to be honest but your
sites really nice, keep it up! I'll go ahead and bookmark your site to come back later on. All the best

Have a look at my weblog diets that work

Asking questions are really nice thing if you are not understanding anything entirely, but this article presents good understanding yet.


Here is my weblog :: http://slc-wireless.com/sac-louis-vuitton-pas-cher.html

Its like you read my mind! You appear to understand so much approximately this,
such as you wrote the book in it or something.
I feel that you can do with some p.c. to drive the message house a little bit, but instead of that,
that is great blog. An excellent read. I'll definitely be back.