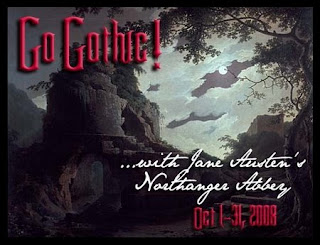 I've decided to join in the Go Gothic - Northanger Abbey reading month being hosted by Austenprose. Even though I have read Northanger Abbey a few times it is definitely one of my favourite Jane Austen novels - maybe even my second favourite after Persuasion. The reading month was originally going to involve reading The Mysteries of Udolpho by Ann Radcliffe (the book that Catherine Moorland is reading in Northanger Abbey) as well but it was apparently taken off the agenda due to a month not really being enough time to take in both books. I have The Mysteries of Udolpho down for one of my reading challenges so I will try and start it soon anyway - might be the perfect time being inspired by Northanger Abbey and Catherine!
Posted by Karen at 10:56 PM

Looking over your blog, I wonder if I can suggest a title you might consider. It is by an Australian author. The title is "Outcasts Of Skagaray". You can preview it by reading the sample chapters on www.threeswans.com.au If you want to read the whole book, some libraries in Australia have copies. It would be good to know what you think.

Hi Andrew - thanks for this suggestion.