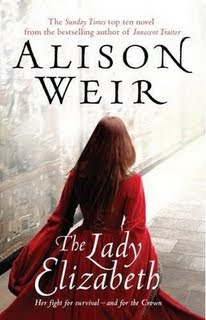 While I was waiting at Sydney airport at the beginning of Sept to head off on our trip I was browsing the book selections at the airport newsagency and discovered The Lady Elizabeth. I had just finished The Virgin's Lover and was keen to keep reading about Elizabeth I - even in fiction form. I had read some of Alison Weir's non-fiction before - The Six Wives of Henry VIII - and I thought her research and attention to detail was brilliant. Unfortunately I didn't love her fiction as much as her non-fiction.
The Lady Elizabeth covers the period of Elizabeth's life from her birth until the time she becomes Queen after the death of her sister, Mary. I really enjoyed the start and the end of this novel but I felt the middle section played out, and read, like a very bad soap opera. This middle section of the book fictionalises and imagines an intimate relationship between the young Elizabeth and a man who may or may not have played this part in her life. In the Author's Note at the end of the book Alison Weir talks about this section and why she wrote it in the way she did;
I make no apology for the fact that, for dramatic purposes, I have woven into my story a tale that goes against all my instincts as a historian! Indeed, I have argued many times in the past, in print, in lectures and on radio and television, why I firmly believe that Elizabeth I was the Virgin Queen she claimed to be, since the historical evidence would appear to support that.
I really think this tale for "dramatic purpose" actually detracts from the novel and makes it weaker than it otherwise needed to be. The narrative of this section feels forced and faked and it was where I lost track of where the story was heading. Weir does bring the story back to focus on Elizabeth and her strengths at the end but for me it felt like it was a little too late.
I am still looking for more books about Elizabeth I (fiction or non-fiction) - does anyone have any to suggest that they have really enjoyed??
Posted by Karen at 4:59 PM

I felt much the same way about this one. I thought Weir made the scenario believeable enough. I just wish she hadn't gone there. Elizabeth's story is exciting enough without adding soapy elements.

I did like Weir's Children of Henry VIII, which has a section on Elizabeth, and her other novel, Innocent Traitor, about Lady Jane Grey, is pretty good. I can't think of any novels about Elizabeth that I've particularly liked, though. It seems like everybody wants to go the soap opera route.

I couldn't make it all the way through this one, glad to hear her non-fiction is interesting though.

I've not read much about the Tudors lately, though I go in phases. It can be iffy when an author decides to dramatize the life of an actual person--especially when they've written NF books on the subject. Too bad it didn't work out this time!

I love the film about Elizabeth I, Elizabeth - The Golden Years starring Cate Blanchett and Clive Owen. I haven't read many books about her but there does seem to be so many films, tv series and books about that period in history around at the moment.
I love the cover of the Lady Elizabeth Book, Karen. I wonder why Alison Weir "goes against all my instincts as a historian!" to include this intimate relationship in the story as she doesn't actually say why, does she.

Hi Teresa - that's exactly what I think about Elizabeth's story! It has always fascinated me.

Hi Jodie - I think if I had been reading this one while I was at home and not while I was on holidays I would have given up on this one too!

Hi Danielle - I know - I was a little disappointed - I will stick to her non-fiction in the future.

Hi Kim - I don't know why she does it!! When the factual material is so interesting too!!

I like the cover of this book, but its seems that more editing would have been necessary

I just finished reading 1599: A Year in the Life of William Shakespeare. Since author James Shapiro covers the political climate in which Shakespeare was writing his plays and poetry, this also happens to be a year in the Life of QEI. Rather than being a birth to death bio, this is a comprehensive look at one year, and is absolutely fascinating. If you want a great QEI non-fiction, I can heartily recommend this book.

I've just about had it with madeup love stories whose role in a book is to add spice to an already fascinating story. What are we to do about it? I blame the editors and publicists and agents for convincing authors that this tripe sells.

David Starkey's Elizabeth is a great biography of Elizabeth 1st. Also, Philippa Gregory writes historic fiction and I think the Virgin's Lover is the one about Elizabeth 1st.
She is one of my heroines so your review is great as I have not read any Alison Weir - thanks for the introduction!

Hi Serena - Yes, the cover is gorgeous isn't it? I think some re-writing as well as editing would have been good for this one!

Hi Jane - thanks so much for your suggestion - that book about Shakepeare sounds great.

Hi Bloomsbury Bell - David Starkey's books are always good aren't they? He does so much research.

I liked this book, but I think Eliz I's life was interesting enough without the "plot for dramatic purposes."