The Year Of The Flood - Margaret Atwood 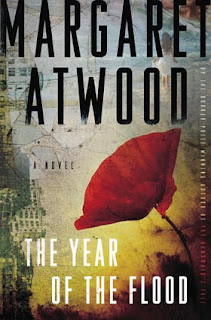 Earlier this year I read Atwood's speculative novel, Oryx and Crake and while it wasn't the type or style of book I would normally pick up I found myself totally immersed in it. I quickly went to my library to get the next novel written about the same period in the earth's future/history, The Year Of The Flood and started reading it right away but I found that I needed to spend some time out of this version of the world and move on to some other reading for a while. I came back to it this past weekend and found myself just as absorbed as I had been when I first picked up Oryx and Crake.
It has been said that you can read these two books separately and in any order but I really felt I enjoyed The Year Of The Flood more for having read Oryx and Crake first. I felt that O&C gave a more general overview of the author's created world and what was happening within it while The Year Of The Flood provided a more focused perspective.
The Year Of The Flood starts off by introducing us to the God's Gardeners - an environmental religious group who believe that all life (animal, plant and human) is sacred and to be respected. Atwood does a fantastic job of describing the group and their intricacies and beliefs and each section of the novel is opened by a speech/sermon from the group's leader, Adam One and a hymn from the groups hymn book. I have to say I found these sermons a little annoying and preachy as the book went on (reminded me too much of being in church as a child!) but maybe that was the author's intent?? However, they did perform a function of showing the internal development of the group as well as the way they were being impacted on by people and the environment around them.
The Year Of The Flood also focuses more on female characters than O&C. The two main characters that are followed are Toby and Ren - two women who have joined the God's Gardeners group for different reasons. Toby is brought into the group as a form of safety after her parents have died and she is forced to work in an abusive and dangerous environment and Ren is brought to the group by her mother when she begins a relationship with one of the groups senior members, or "Adams". I thought with this focus on female characters I would have enjoyed Flood more but I have to say that I feel O&C is my favourite book out of the two. That is not to take anything away from Flood - it is another clever and intriguing book by Atwood. I can't believe the strength and bounds of this woman's imagination! Although some would say that some of the elements described in both these books could be scarily close to coming true in our own world - particularly in relation to the environmental aspects and the destruction of whole species and their habitats.
Atwood's writing, as always, is sharp and descriptive - her characters have depth and complexity - you care about what happens to them - good or bad.
The ending of the book is deliberately open - is Atwood planning a third book?? I hope so!
Posted by Karen at 12:33 AM

Thank you for this review - the books sounds like classic Attwood. Have ou read "The Handmaid's Tale"? - you might enjoy that! Hannah

I have collected almost all of Atwood's novels and yet have only read about 3 so far. I am always put off by the size, even though I love them when I get into them. Once I've read Oryx and Crake I will definitely read this - your brilliant review has inspired me!

Great review! I have this one on my TBR shelf and after reading your post I think I'm actually going to read O&C first (luckily that is also on my TBR shelf). I love Atwood's books - they are always brilliantly written and so engaging. I'm looking forward to these speculative fiction texts. Thanks!!

I agree completely with your review, Karen. I also read Oryx and Crake first (and liked it better), and found the hymns annoying! Atwood is certainly brilliant and although I would not call myself a dystopian lit kind of gal, I can read and enjoy Atwood's books any day of the week :) I have heard this is the second in a proposed trilogy...I will definitely read #3 if that is the case. Thanks for the great review.

I agree with you that these books are best read in the order they were written. I'd be curious to know if there will be another installment!

I can't wait to read this one! I absolutely loved O & C...well, as much as you can love dystopian fiction :) It's fascinating how she can combine such relevant (and frightening) themes which are almost sci-fi but not (agh!) with three dimensional characters, humour, feminism, and an elegant writing style. I really hope that this kind of fiction will help to steer the world in a healthier direction.

I wrote my review of Year of the Flood yesterday (it'll post tomorrow)...and it's freakishly similar to yours. I commented on not liking the sermons, preferring O&C, and wondering if there would be future books set in this world.

I swear there was no plagiarism! :-D

I need to read Oryx and Crake and did wonder if I had missed out on something. I did think this stood alone having not read O&C. I have heard rumours that there maybe a series of these every so often. It could just be rumour though.

Hi Hannah - I have read The Handmaid's Tale - ages and ages ago now. I remember that was really the first book of that genre I had ever really read and I really enjoyed it.

Hi bookssnob - Most of Atwood's books are quite large aren't they? I think once you get into them though they just fly and you end up wanting them to be even longer!

Hi Nadia - Brilliant writing is definitely contained in every Atwood book! I hope you enjoy these ones when you get to them.

Hi Wendy - thanks for the link to your review - and for the news about the 3rd book!

Hi Tara - It sounds like a lot of people agree with us on the order of reading for these ones.

Hi stockdove - they are books that can have a huge personal impact aren't they?

Hi softdrink - that is so funny!!! I'm looking forward to reading your review now.

Hi Simon - I really hope the rumour is true!!

I only managed to the halfway point in Oryx and Crake but it was a matter of wrong timing as opposed to out-and-out disliking it; I plan on giving it another go and then reading The Year of the Flood at some point in the near future.

I have O&C on my shelf at the moment, just waiting to be read.Of course, I fully intend to read this after.

I've only read Handmaid's Tale so far, and found it stunning.

Hi Claire - I know what you mean. I think if I had started either of these at a different time I would have done a similar thing. They are definitely books you need to be in the mood for.

Hi anothercookiecrumbles - I think I might have to re-read The Handmaid's Tale at some stage - I remember really liking it but that is about all!