The Weed That Strings The Hangman's Bag - Alan Bradley 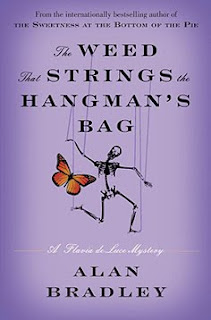 The Weed That Strings The Hangman's Bag is the second book (and another great title!) in the Flavia de Luce mystery series that started with The Sweetness At The Bottom Of The Pie.
The Sweetness was one of my favourite reads from 2009 so I was expecting big things from the sequel - and I have to say that it didn't quite deliver for me. Don't get me wrong - I am still totally in love with Flavia and her "Flavia-isms" which are still dotted through the novel in regular spaces;
I have never much cared for flippant remarks, especially when others make them, and in particular, I don't give a frog's fundament for them when they come from an adult.
Flavia is still very much Flavia - bright, intelligent, curious and certainly obnoxious when the occasion calls for it. I felt that Bradley has continued to set up Flavia's family history and back story well (particularly in relation to her mother Harriet and her untimely death - an event I am sure we will learn more of in coming books) but I felt that other aspects of the book were lacking a little spark that the first book had. I don't read a lot of mystery novels so it would be interesting to hear from more experienced mystery readers than myself about what they thought of that aspect of the novel - there were certainly mystery elements but I felt the author was concentrating on other issues much of the time which confused the reading for me a little.
Maybe I was just expecting a little too much - other reviews of this one seem to be mainly favourable - some even claiming it was better than the first book in the series - so maybe I have just missed the magic with this one. I will still be following Flavia's adventures - she's too engaging not to!
Posted by Karen at 3:47 PM

I'm actually reading The Sweetness at the Bottom of the Pie right now! I'm only about 3 chapters in and loving it...good to hear that the sequel is still Flavia--even if it didn't quite reach the same place as the first for you

I enjoyed the first Flavia mystery so I'll definitely be reading this one. I think more than the mystery which was predictable, at least in the Sweetness at the Bottom of the Pie, I loved the character of Flavia and would love to revisit her.

I haven't read any Flavia books, although always walk passed TheSweetness at the Bottom of the Pie in the library and think about it. Perhaps I should read them.

Hi Victoria - I envy you reading that books for the first time! It was an absolute delight - I hope you continue to love it.

Hi Mrs B - I think this series is all about Flavia too - she's the reason I will keep on reading for sure.

Hi Elise - I definitely recommend reading Sweetness - just such a gorgeous, original book and the character of Flavia is devine.

Too bad you didn´t love this one as much as The Sweetness. I actually liked it just as much, maybe even a bit more.