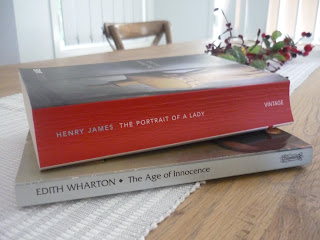 I don't know how I managed it but my last two reads of 2010 have not only been two of my best reads of the year but possibly two of my best reads of all time.
The Portrait of a Lady and The Age of Innocence have been two books I have been meaning to read for quite a while now and for some reason they both fell into my hands at about the same time. I was taken by the similarities between the two even though they were written at different times (Portrait was first published in 1881 and Innocence in 1920 - although it does focus on the era of the 1870's). Both stories have young, inexperienced heroines (although one seems to be clearly seeking the expected path of marriage and family while the other tries hard to steer a different course at first) and both focus on the society of the time and the way in which rules and expectations impact on the decisions and behaviours of the characters.
The Portrait of a Lady was my first experience of reading Henry James and it was pure bliss! How could I not have known what I was missing out on??! I have heard quite a few people list him as one of their favourite authors and I think I will become one of them now.
I was hooked from the very first line of the book;
Under certain circumstances there are few hours in life more agreeable than the hour dedicated to the ceremony known as afternoon tea.
I couldn't agree more! Of course the book does explore deeper topics than the joy of afternoon tea. The heroine of the novel, Isabel Archer is a young American woman brought to England by her aunt, Mrs Touchett, after the death of her father. Isabel becomes close friends with her uncle and her cousin Ralph and when Mr Touchett dies soon after Isabel's arrival in England he leaves her (at the request of Ralph) a considerable fortune to enable her to live out her life goals of exploration and travel. Isabel is approached by several young men with marriage proposals but she refuses them all - until the arrival of the older and more charming Gilbert Osmond. Isabel accepts Osmond's proposal even after the disapproval of her family and friends is voiced to her, especially Ralph's;
'You were the last person I expected to see caught'.
'I don't know why you call it caught'.
'Because you're going to be put in a cage'.
'If I like my cage, that needn't trouble you,' she answered.
Of course soon after the marriage Isabel realises that Osmond is not the person she thought he was but it is too late and her family and friends watch her turn from a bright, passionate woman into a faded version of her true character.
I loved Isabel but I was frustrated by her at the same time - when she agreed to marry Osmand I found myself yelling out loud "NO - Listen to Ralph!!!". But then the novel would not have been what it was without that decision. The second half of the book is painful to read as we witness Isabel's awful marriage and see Ralph's prediction come true - she is caught in a cage with no sign of release and yet she finds that maybe she doesn't like it so much after all.

I decided to read The Age of Innocence after finishing The Portrait of a Lady because I wanted to stay in a similar era with my reading (truth be told I really wanted to go back and start The Portrait all over again I loved it so much!). This novel again focuses on women characters and the impact of their decisions to marry certain people but told from the perspective of a male character. Newland Archer is a member of upper class New York society in the 1870's and as the novel begins his engagement to May Welland is just about to be announced - an event that coincides with the return to New York of May's cousin, Countess Olenska who has scandalously left her brutal marriage to a Polish nobleman.
Countess Olenska raises thoughts and feelings in Newland that have been rising for a while - why is society so structured and rule bound - why must women (and men for that matter) be constrained to act and behave in certain ways even when that goes against their natural instinct?
Newland begins to see the constraints of his upper class society and he himself begins to feel constrained by it - he falls in love with the Countess but marries May anyway because it is what is expected of him.
The novel is really about the games that the members of the upper classes played at this time to keep their society and it's structure intact - through Newland's newly opened eyes we are able to see these games for what they really are - and yet no one ever stops playing them!
It is the conventions of this society that stops Newland from following his heart - even at the very end.
I cannot recommend either of these two books highly enough - and I think I will be re-reading them again myself very soon!
Posted by Karen at 3:52 PM

I just got a copy of The Portrait of a Lady and I cannot wait to read it. I haven't gotten to that Wharton yet, but I am so excited to! Wharton is one of my favorite authors! I'm glad you enjoyed them both!

The Age of Innocence is one of my favorite books of all time! It's so delish. I've always been intimidated by James (mainly because movies based on his books always seem so long and boring), but maybe I should take a chance and try Portrait of a Lady!

Two of my favorites too! - and I'm way past due to reread them both. Wishing you a happy new year... hope to see you in Paris again! :)

Hi Allie - I hope you enjoy Portrait as much as I did!

Hi heidenkind - Delish is definitely the way to describe the Age of Innocence! I hope you take a chance on The Portrait of a Lady - it paid off for me!

Hi Audrey - Happy new year to you too! Tamara and I were only talking about Paris in July yesterday - we are definitely looking at running it again in 2011.

Oh, Karen, Wharton and James are two of my favorites! I absolutely loved The Portrait of a Lady, and plan to read more James in 2011. Although I've read many of Edith Wharton's books, have never gotten to The Age of Innocence - which most point to as her masterpiece. It's on my shelf though, and I'm hoping to get to it for the TBR Dare. So glad 2010 ended on such a high note for you. Here's to a happy 2011!

I just read The Age of Innocence and LOVED it too - what a remarkable, amazing book. However, I have tried and failed to read The Portrait of a Lady many, many times. I find Henry James' writing impossible. Perhaps I need to try him again...you speak so highly of him that I'm certain I was just too young to appreciate him at the time of trying.

Hi JoAnn - I a, so glad I have finally come on board with these 2 authors - I will definitely be reading more of both of them in 2011!

Hi booksnob - Sometimes for me it is all about timing when reading some books - I have to be in the right mood and space to be able to appreciate some books I think.

Karen, What a fantastic review. Thanks. I had no idea about these books (how un booky of me)but you've cleary summarised what appear to be very valuable books. Must put them on my list one day too. I love the way you review too - not too much about the story but lots about why you liked them. I almost feel like I've read them through you.

I'd love to reread Portrait of a Lady too; the other of his that I enjoyed was Washington Square, although I didn't warm to The Golden Bowl or The Wings of the Dove in quite the same way...

Hi T - thanks! I loved both of these books so much I think I could have written pages and pages on them both!

I finished The Portrait of a Lady last night and loved it. The dialogue is so sharp and funny, but James seems quite compassionate too. I'd recommend Edith Wharton's book Summer - the heroine Charity Royall is extraordinary. Aren't the characters' names in James' and Wharton's books wonderful - Caspar Goodwood, Ralph Touchett, Newland Archer.

Howdy! This is my 1st comment here so I just wanted to give a quick shout out and say I genuinely enjoy
reading through your articles. Can you suggest any other
blogs/websites/forums that deal with the same topics?
Thanks a ton!

Here is my webpage ... Graduate Certificates

Hello there! I know this is kind of off topic but I was wondering which blog platform
are you using for this website? I'm getting tired of Wordpress because I've
had problems with hackers and I'm looking at alternatives for another platform. I would be awesome if you could point me in the direction of a good platform.

Here is my web page; Bmi Calculator For Females

Very nice post. I simply stumbled upon your blog and wanted to say that I've truly loved surfing around your blog posts. After all I will be subscribing on your rss feed and I hope you write again very soon!

wonderful issues altogether, you simply received a new reader.
What could you suggest about your publish that you simply made some days ago?
Any certain?

What's up, yup this article is actually nice and I have learned lot of things from it concerning blogging. thanks.

I don't know whether it's just me or if perhaps everyone else
experiencing issues with your site. It appears
as though some of the text in your posts are running off the
screen. Can someone else please comment and let me know
if this is happening to them too? This could be a issue with my browser because
I've had this happen before. Appreciate it

Thank you for sharing your info. I really appreciate your efforts and I am waiting for your further write ups
thanks once again.

Wow, wonderful blog layout! How long have you been
blogging for? you make blogging look easy. The overall look of your website is wonderful,
let alone the content!

Feel free to surf to my homepage ... modernmethodsmarketing.com