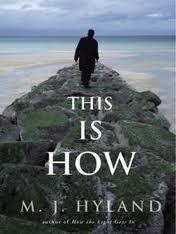 For those of you who have read my previous post, don't despair - I am still attached to, and enjoying my read of A Suitable Boy. I had just collected some books I had on hold at the library over the weekend, one of them being This Is How and after I had briefly skimmed the description of it and then read the first lines I couldn't stop until I had read the whole thing! A common reading problem for me! For the life of me I can't remember who's blog I recently read a review and made a comment on about this one - if it was you could you please jog my memory?? I do remember saying that I thought the subject matter of this one might be a little dark for me right now so I'm not sure why I even put it on hold at the library - but I am so glad I did.
I have tried to think about a way to talk about the book without giving away the plot (a plot that is fairly commonly known anyway I think?) but I am completely failing so I will just send out a warning instead - if you don't want to know too much (apart from the fact that I think this is a brilliant read, don't read any further!).
This Is How starts in the simplest of ways;
I put my bags down on the doorstep and knock three times. I don't bang hard like a copper, but it's not as though I'm ashamed to be knocking either.
The porch light comes on and the landlady opens the door. She's younger and prettier than I expected.
'Hello,' I say. 'I'm Patrick.'
The simpler the beginning the more I am hooked - I just want to know so much more, who is Patrick? Why is he knocking on the door of this house? Why is he so nervous about the style of his knock? etc...
The book is set mainly in an English seaside town in an era that is never definitely defined but I placed it sometime in the 1970's. Patrick is a man in his early 20's who has moved from his hometown after the breakup of a relationship to live in a boarding house by the sea. We get the sense from him that he is wanting to start afresh but it is clear that Patrick has trouble forming and keeping relationships and that his interpersonal skills in some instances are put to the test.
The simple yet in depth narrative - told from Patrick's perspective - lets us see inside his mind to the thoughts that are troubling him on a fairly constant basis - he lacks trust in himself and those around him. The middle of the book culminates in Patrick killing another one of the tenants in the boarding house - a young man who he has struggled to form a friendship with.
The actual murder is stark and simple and the rest of the book follows Patrick as he goes through the legal system in an attempt to be cleared of all charges laid against him.
I'm not sure how the author did it - I look back over the prose and it seems so simple (that word again!) but maybe that is the magic of it - no bells and whistles - just a clear, concise narrative from the mind of a young man.
I was afraid that this book would be too dark for me but I did not find it that way at all. It was certainly sad and tragic in many ways but there were also elements of hope - particularly in the ending.
Posted by Karen at 9:30 PM

I agree - it takes a lot of talent to write so powerfully in such a simple way. I'm glad you appreciated this one too.

I am currently waiting for this book to arrive so I will read the rest of your post when I am done with it!

Hi Jackie - Definitely appreciated it - so much more than I thought I would actually.