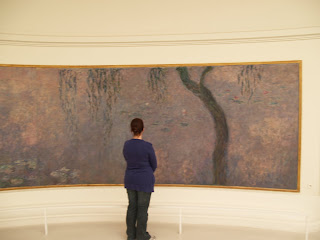 Reflecting on week 3 of Paris in July - and I can't believe we are almost at the end of the month! I haven't "spoken" with Tamara today but I know she will be somewhere in Paris madly celebrating this win!
I must admit I have spent a lot of this past week dreaming of travel and thinking about when I might be able to get back to Paris myself - hopefully it will not be too far in the future. In the meantime I have had Paris in July to fuel my dreams. Tamara has sent me an email summarising what people have been doing during this week:

- Paris was ours, Penelope Rowlands - Lakeside

- My life in france, Julia Childs - my cosy booknook

- Mastering the art of french cooking - my cosy booknook

- The Chatelet Apprentice - a work in progress

- A very long engagement - only orangery

- Aicha, cheb khaled - not too sophisticated.

- a few of my favourite french things - Kelly


Thank you to everyone for all your fantastic contributions and now onto this weeks winners, they are:

JoAnn - Lakeside Musing
and
Marg - The Adventures of an Intrepid Reader

I will pop over to your blogs to leave you a message and let you know how to get in touch with me to claim your prize!
I hope everyone enjoys the last week of Paris in July 2011 - please leave the links to your posts for this final week in the comments section of this post. Tamara and I would also love to hear your ideas, comments, suggestions etc... for next years event. We are so excited by how many people are interested in joining in this event that we really want to put some thought into making it even better next year.
Posted by Karen at 6:46 PM

Yay! Thanks so much!

Not mentioned on the the list above I also reviewed Before Versailles (book) and spotlighted the Paris Breakfasts blog.

Thank you so much! It's been such fun reading all the Paris-themed posts.

Such a varied list of books too. Will have to catch up after work, checking them out.

Also not mentioned, I reviewed two movies: The Triplets of Belleville and The Diving Bell and the Butterfly

Thanks everyone for your great reviews. I agree with Sarah, it's been a fantasticaly varried collection of authors, genres and styles. So many idea's for the future... I hope to be able to post very soon on the past week of action here in Paris!

My post for this week is on Colette's Chéri, here.

Last week I reviewed Americans in Paris on US citizens who stayed in Paris in WW2: here.

I also reviewed No and Me by Delphine de Vigan this week. http://thenovelworld.com/2011/07/25/no-and-me-delphine-de-vigan-review-paris-in-july/

I also wasn't mentioned in the list of reviews from last week. I reviewed the books French Impressions and Lunch in Paris.

I read The Virgin Blue by Chevalier and got a history lesson of the Huguenots.

Hoping to finish one more book before the end of July, about Antoine Lavoisier, the chemist.

Just want to say first of all, congratulations to the winners. Secondly, thank you so much for hosting this Karen and Tamara. It really is great fun seeing all the posts about Paris related things around the blog0sphere, and I can't tell you the enjoyment I have personally with Hemingway and The Paris Wife.

Also want to pass along that my friend Arti at Ripple Effects wants to join in Paris In July II. Perhaps you could add her name/blog which can be found here:
http://rippleeffects.wordpress.com/?

Yes, my current post is a review of Hemingway's A Moveable Feast. A few posts earlier I'd also reviewed Woody Allen's new film Midnight In Paris.

Thanks for hosting this wonderful blogging event!

My thoughts on Midnight in Paris - http://thestorygirlbookreviews.blogspot.com/2011/07/book-to-movie-midnight-in-paris.html

My reads so far this week:
The Vagabond by Colette
Fair Stood the Wind for France by H.E. Bates

My take on France through books and movies. Looking forward to this last week when I investigate French cooking.

Hi - is this where we leave links to our posts?
I was lucky enough to interview John Baxter about his new book 'A Pedestrian in Paris - The Most Beautiful Walk in the World here and he shares some great tips on things to do in Paris!

Sorry to be MIA lately, but I just finished an amazing book by Zola called Pot-Luck. It was great and I can't wait to read more of his books. Here's a link:

I have a few more reviews to post for Paris in July and I'm still hoping to watch some of the French DVDs I've checked out of the library!

And I need to eat some French food, definitely.

I'm now down in Montpellier - taking French lessons - 5 hours a day!!! c'est tres difficile et maintenant je suis tres fatigue. Still, I have more time and free wifi - so watch for a few more posts in the next 10 days!

Hi Marg - thanks for the addition!

Hi JoAnn - so glad you have been enjoying the trip!

Hi Sarah - thanks for letting us know about your reviews.

Hi bibliolathas - thanks for the links!

Hi Nari - thanks for letting us know your links - I know Tamara was creating the list while taking a bus trip so she might not have captured all the reviews from last week.

Hi raidergirl3 - I remember reading that book - one of my favourite authors - she does some great research for her books.

Hi Bellezza - I'm so glad to hear that you have been enjoying the month - and I will add Arti to the list.

Hi Arti - Welcome! I can't wait to see Midnight in Paris when it finally gets to Australia.

Hi L.L., Her Royal Orangeness and Tami - thanks for your links!

Hi Packabook - what a great coup being able to speak with the author!

Hi Karen - Zola has been one of my favourite finds of this month too.

Hi T - we are all so jealous!! It sounds like you are having the time of your life - looking forward to hearing more about it. xox

I am excited to look into all these books. I've read many of them (and lots not on the list!) but many are new to me!

I'm so behind on visiting -- I'm glad posts don't go away right off the bat so I can still keep looking in on people!

Thanks, Karen (and Tamara) for coordinating this. I love it!

What a terrific list! Congrats on having so many Paris-soaked participants!

My final post for this years Paris in July event is about Lunch in Paris by Elizabeth Bard.

Thank you to both Karen and Tamara for hosting this event again this year, and I look forward to participating again next year!

Hi, I've posted 2 reviews for Paris in July (I forgot to leave a comment for the first one - oops): The Suicide Shop by Jean Teule and
Paris Album 1900-1914 by Jean Cocteau.

I had a GREAT time participating and look forward to it again next year!

Thank you Karen and Tamara for the most fun introduction to blogging community activities! I have loved Paris in July! Boo hoo that it comes to an end today!

My final post (http://theeditorunedited.blogspot.com/2011/07/matter-of-feeling-by-janine-boissard.html)was a lovely read and I am currently reading another book - Toujours - which was also for Paris in July but which two sick babes meant I was unable to finish (rightly of course) in time, thus I won't feel the end of Paris in July so suddenly as August arrives :)

btw - is this hill-slide towards Christmas flying? Seriously...worrying flying of time! Though it will be Southern Hemisphere summer and in that way I will be grateful for the passing of time.

My new post "The Letters of Van Gogh" is my last entry for Paris In July. Some photos from my visit to Arles last August. If you're interested, here's that travel post: "Arles: In the Steps of Van Gogh".

Thanks for hosting this wonderful event!

Forgot to leave you a link to my present post "The Letters of VIncent Van Gogh", here it is.

List of the books I read, with ratings and links to reviews. List of the films I watched, with links to the posts about them. AND a few links to Paris In July posts I enjoyed on other blogs.

I had so much fun with this blog event, and am more than a little sad that it's already over.

My Paris in July wrap-up:
http://lakesidemusing.blogspot.com/2011/07/sunday-salon-au-revoir-july.html

Thanks again for such a wonderful month!

Here is the last (sniffle) Scenes of Paris post - on food! http://thestorygirlbookreviews.blogspot.com/2011/07/scenes-of-paris-food.html